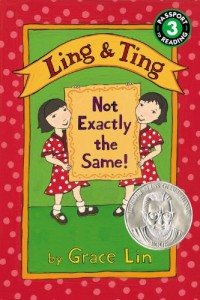 Ling and Ting are twins, but they are not exactly the same. In a clever plot twist during the first book (Ling and Ting: Not Exactly the Same), Ling and Ting are made distinguishable in a manner that is clearly visible in the illustrations. This subtle difference is continued throughout the series, enabling the perceptive reader to know who’s who. Each volume contains several chapters that are both distinct short stories and parts of a whole, longer narrative.

The Ling and Ting books stand out among many easy reader series in several ways: they are about real people instead of talking animals, they feature non-white characters, and they are realistic. A great choice for kids who are reading around a first grade level, these books offer a sweet picture of twins enjoying typical kid activities such as birthdays, hair cuts, and telling funny stories. Recommended for their childlikeness, their portrayal of sibling love, and their craftsmanship.