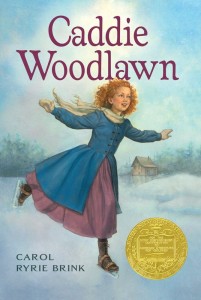 Bottom Line: Caddie Woodlawn, one of America’s favorite pioneer girls, turns 80 this year; her adventurous story of growing up on the frontier continues to delight young readers.

Based on Carol Ryrie Brink’s own grandmother’s experiences, Caddie Woodlawn was first published in 1935 and awarded the 1936 Newbery Medal. Eleven-year-old Caddie Woodlawn, the middle child in her large family, is a red-headed tomboy who rebels at her mother’s and older sister’s attempts to make her more ladylike, preferring instead the wild adventures she has with her two close brothers. Those adventures include such unladylike actions as swimming, ice skating, and rescuing the school from a prairie fire. Caddie doesn’t realize it, but she is also demonstrating her own unique gifts along the way as she compassionately spends her money to help some poor children, patiently learns how to repair watches at her father’s side, and keeps “Injun John’s” dog for him after bravely warning him of the white settlers’ unrest.

What makes a book like Caddie Woodlawn stand the test of time? It’s authentic. Not only is it grounded in a real woman’s memories of life on the frontier, it tackles issues that are real and true for all times: race relations and judging people from other cultures before getting to know them,* freedom and responsibility, when it’s worth sacrificing your home for a new adventure (and when it’s worth staying put!), how to love your family members through the easy times and the hard times, and how to grow up into the person God made you to be. Caddie grapples with each of these throughout the book, and she ends the book ready to become a woman—not a simpering, frail creature, but a strong, multi-skilled pioneer who is ready to love, protect, and serve her future family.  *Note that many find the terminology used in this book for American Indians to be offensive. Certainly we wouldn’t condone someone saying “Injun” or “savage” today, but this would have been standard white settler vocabulary during the time period. It’s worth pointing out that Caddie herself is a great example of someone who does not let cultural stereotypes and fear keep her from seeing her American Indian neighbors as people just like herself.

Caddie Woodlawn is a great choice for a family read-aloud because her rambunctious spirit is often echoed in young listeners, be they boys or girls! Caddie Woodlawn is also a wonderful follow-up to the Little House books; it is a harder and more complex read than the first few Little House books. A fun read about a boy learning to embrace his own unique gifts during a similar time period is The Great Turkey Walk. Many parents (and grandparents!) today will remember reading Caddie Woodlawn during their own childhoods. It’s time to revisit this classic.