Mystery Under the Stars

. . . In which we crack the spines of two middle-grade novels that have been getting a lot of favorable press: both are mysteries, both take place in atmospheric locations during high summer, and both are narrated by misplaced eleven-year-olds girls who speak well above their grade level. 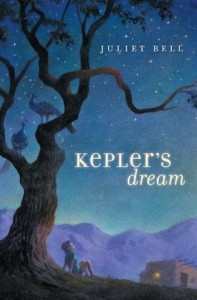 Ella’s messy family just got messier, now that her mom is scheduled for a long-term hospital stay to try a radical new treatment for her leukemia.  It seems logical to turn to Ella’s divorced Dad for temporary parenting, but Dad, as usual, is guiding a fishing expedition in Washington.  Ella doesn’t know him that well: “The break happened when I was a tiny baby.  I guess one day they looked at each other and Boom! realized they hated each other’s guts—they must have forgotten to notice when they got married.”  Her father has little practice at fatherhood and isn’t keen to practice up now; instead he arranges for Ella to stay with his mother, whom she doesn’t even remember.  So off she goes to a hacienda near Albuquerque, ruled by a domineering Grandmother (or GM) with a book fetish and a herd of peacocks.  If you’re thinking Flannery O’Connor, forget it; this is classic misplaced-middle-grader-with-mystery.  Actually several mysteries, like why Ella’s dad can’t get along with his own mother, what unfortunate accident claimed Ella’s grandfather, and most of all, who stole the prize of GM’s book collection, an early edition of Johannes Kepler’s Dream?

Apparently Kepler, the brilliant Renaissance astronomer who verified the theory of a heliocentric planetary system, began the book as a student dissertation but abandoned it, and didn’t come back to it for twenty years.  It could best be described as speculative fiction, a forerunner of sci-fi: a university student is transported to the moon by demons, from which he observes lunar geography and writes rhapsodic descriptions of earth and surrounding space.  I actually learned none of this from Kepler’s Dream, but looked it up online.  Kepler was a fascinating figure in his own right; it seems an author could have wrung some high-octane narrative juice from a commoner whose mother was almost burned as a witch and whose siblings were all mentally or physically challenged.  But the reader of Kepler’s Dream will learn very little about him.  Even his book, when Ella finally gets her hands on it, receives little description, especially given its importance in the story.

Ella learns that her fascination with the stars is shared by other blood relatives, and that family itself is a complicated business: “One thing I’ve thinking about here at Broken Family Camp (another name I came up with) is when blood ties are important and when they’re not.”  The chief mystery isn’t all that mysterious, but includes some surprises.  Meanwhile, Ella is dealing with the helplessness of her mother’s condition: “All over the place there were people praying for my mom.  I just had to hope the praying would work.”  Her hope isn’t based on anything in particular, and prayer doesn’t play a big part in it.  Those nearest to her can only offer hazy guidance: “[Mom] told me that I should think of her as going back to the stars.  She said that’s all we’re made of anyway—that it’s the same stuff . . . and so, if she died, I wasn’t supposed to feel too terrible.  I was just supposed to look up at the stars and know that she was somehow back there with them, floating around in the galaxy.”  Even Ella admits this isn’t much comfort.

Kepler’s Dream comes festooned with a galaxy of high-profile-author blurbs, but as my readers might guess by now, the book didn’t take off for me.  Ella’s voice, though engaging, seems too old for her eleven years, and all the mushy talk about space and the stars create a spectrum of “meaning” that doesn’t really hold up. 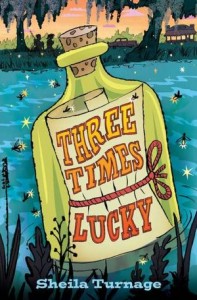 Mo LoBeau, of Tupelo Landing, NC, dates her original luck from her birth during a hurricane, eleven years before.  “That night, as people slept, they say, the rivers rose like a mutiny and pushed ashore, shouldering houses off of foundations, lifting the dead from the graves, gulping down lives like fresh-shucked oysters.”  While the storm raged, her unknown “upstream mother” strapped the newborn infant to a window shutter and set her adrift, where she came to rest almost literally in the arms of another lost soul.  This is “the Colonel,” who lost his memory and drove his car into a tree (not necessarily in that order) just outside Tupelo Landing.

He names the mystery baby Moses before noticing she’s a girl, but in spite of this little oversight the Colonel becomes a foster father, and Miss Lana, who owns the town’s only café, takes on the mama role.  Mo grows up surrounded by loving, quirky characters, including her best friend Dale (middle name Ernhardt)—a fact that could quickly turn gimmicky were it not for the exceptional way she has of putting words together.  Such as, “Dale can choose not to worry like he chooses not to wear socks.  Miss Lana says I have more of a Jack Russell brain.  I think things apart for sport.”  Sometimes that kind of brain comes in handy, like when a police detective from Winston-Salem walks into the café looking for clues in a murder case.

The voice is genuinely original and almost makes the book worth a read just for itself, but there are a few problems.  The murders are real murders and occasionally the narrative breaks out in a level of violence that seems incompatible with its folksy tone—at least for readers of this grade level.  (Mo turns out to be one tough cookie, obviously headed for a career as the kind of cute, butt-kicking law-enforcement officer featured in almost every TV cop show.)  The plot seems a bit lumpy: slow to take off, then crunching action like a monster truck through the last fifty pages or so.  Family is complicated here, as it is in Kepler’s Dream–it’s basically what you make it.

An interesting summertime challenge might be to ask your 10-13 year-old what worldview she discerns in these books.  One good way to pick up on this is to notice what the characters–especially the ones you’re supposed to like–say about God, prayer, faith, church, or family.  For instance, from the Colonel: “We’re born over and over, day by day.  When you feel lost, let the stars sing you to sleep.  You’ll always wake up new.”  What does this mean, especially in light of his memory loss?  And what might it mean that the character who stands up for absolutes in Three Times Lucky turns out to be one of the bad guys?

For more on worldview, see our Parents’ Guide to Environmentalism, Parts I and  II.  For other reads for middle-grade girls, see Small-Town Summers and Among the Fairies.