The Secret Lives of Animals 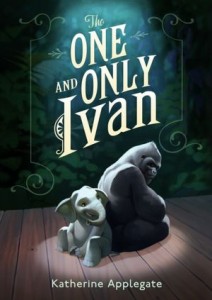 Last week, a little bluebird appeared in our wood stove.  The stove was not fired up, of course: at this time of year it’s an iron box about 18” square with a sooty floor and a glass door.  My husband noticed a mad fluttering in there one afternoon: somehow she’d come down the chimney.  By the time I got home that evening she was quiet.  “Look,” he told me, and pointed with a flashlight.  It’s a bit of a jolt to see wildlife in the very heart of domesticity; behind the glass, she was like a new exhibit at a nature center, still and wary.  Doug had a plan for capture, which would wait until morning.  The bluebird slept with her head tucked under a wing and one foot pulled up.  At the brimming of dawn she hopped to the ledge in front of the door and said, “Peep?”  We captured her in a mesh bag and carried her outside, where she shot like an arrow to the nearest tree.  The entire incident was probably gone from her memory by the time she perched.

But who knows what goes on in a creature’s mind?  Suspension of disbelief was not always willing as I read The One and Only Ivan, but his voice is so personable, in its rumbling, rambling way, it pulled me back again and again.

Ivan is a gorilla:

Mightier than any human, four hundred pounds of pure power.  My body looks made for battle.  My arms, outstretched, span taller than the tallest human.  My family tree spreads wide as well.  I am a great ape, and you are a great ape, and so are chimpanzees, and orangutans, and bonobos, all of us distant and distrustful cousins.  I know this is troubling.  I too find it hard to believe there is a connection across time and space, linking me to a race of ill-mannered clowns.

Chimps.  There’s no excuse for them.

Ivan knows more evolutionary biology than he should, and a lot of other subjects besides, as he’s been living among humans for some time now.  His memories of childhood in central Africa are dim and sad, especially since his twin sister Tag did not survive capture.  All he has of her is a stuffed gorilla he calls not-Tag.  But life isn’t all that bad: “I live in a human habitat called the Exit 8 Big Top Mall and Video Arcade . . . Beyond the lot is a freeway where cars stampede without end.  A giant sign at its edge beckons them to stop and rest like gazelles at a watering hole.”  He’s part of a small menagerie that also includes an elephant named Stella and assorted parrots and monkeys.  Every day he stares at humans and they stare back, through a glass wall that says “you are this and we are that and that is how it will always be.”

Ivan is philosophical by nature: “Gorillas are not complainers.  We’re dreamers, poets, philosophers, nap takers.”  He’s also an artist, ever since the janitor’s daughter Julia gave him a stubby blue crayon and a piece of paper.  Drawing keeps him from boredom, and that’s a blessing.  He’s also blessed in his two best friends: Stella, wise and patient, and Bob, a mongrel dog who sneaks in at night to sleep on Ivan’s stomach.  One day is pretty much like the next until Ruby arrives.  Ruby is a baby elephant who needs love, an education, and protection.  Stella provides the love, Bob the education, and as for protection . . . well, male silverback gorillas like Ivan are made to protect.  But will he get the chance?

The story is simple and quiet; it’s the characters and especially the voice that make this book compelling, worthy of a place among classic animal fantasies like Charlotte’s Web and Watership Down.  The author based her story on a real Ivan who was confined to a cage in a circus-themed mall in Washington state for 27 years, before a public outcry got him transferred to Zoo Atlanta, where he signs paintings with his thumbprint.  “A good zoo,” Stella explains to the fictional Ivan, “is how humans make amends.”

Humans.  Bob, in a most un-doglike manner, is cynical about them (coincidentally, I came across this Bob-the-dog story just this morning), and a lot of readers will subconsciously agree.  They’re “an unpredictable species,” Stella says–true enough, because we’re a conflicted species.  Psalm 8 says we’re a little lower than the angels, crowned with glory and honor, made to rule over the works of God’s hands, over herds and flocks and beasts of the field.  But man has fallen, and the beasts have not.  Man is guilty, animals are innocent.  Man confuses dominion with tyranny, as Bob and Stella and little Ruby have good reason to know.  But does that mean we must make amends with a Good Zoo?  Or is even a good zoo a form of oppression?  The One and Only Ivan offers an opportunity to talk about it with children, especially since kids and animals have a natural affinity.

C. S. Lewis is helpful on this, as in so many other areas.  An entire chapter of The Problem of Pain deals with animal suffering and human culpability.  That Hideous Strength includes a fictional treatment of the theme, showing how out of whack our relationship has become since the garden, where animals were made to be “loyal companions and playfellows.”  Somewhere else (Surprised by Joy?) he remarks how the relationship of animals to us (mammals, at least) is analogous to the relationship of us to God.

They are God’s creatures, straight from His hand, with a direct connection to Him that we, alienated and fearful, can’t share.  “These all look to you to give them their food in season” (Ps. 104:27).  “All creatures praise him” (Ps. 150:6) simply by being.  As such they are worthy of our consideration and care and wonder, whenever appropriate.  On the hierarchy of being our foot has slipped, but dominion is still a given, and always will be.  Adam named all the animals, and we still do: name them, study them, write about them, and write for them—Ivan’s voice is mediated through Katherine Applegate, who is exercising her own form of kindly dominion.  So is Julia, in the story, who gives him his first crayon and inadvertently illustrates the great gulf between them: “Julia draws the ideas in her head.  I draw the things in my cage,” having no power to imagine a creative solution to his problem until the end. 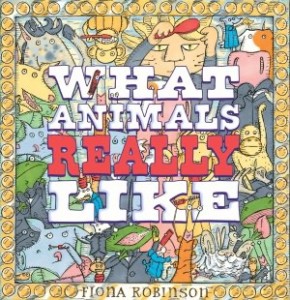 But we can also have some fun:

What Animals Really Like, a song composed and conducted by Mr. Herbert Timberteeth.  Lyrics and pictures by Fiona Robinson.  Abrams, 2012.    Age/interest level: 4-8.

It’s a big night for Maestro  Timberteeth, a self-important beaver.  Having assembled a huge mixed chorus of lions, cows, horses, warthogs, frogs, and various other creatures of woods and water, he’s ready to stun the world with his newest composition.  But when a renegade bovine quartet breaks from the libretto—and breaks up the rhyme—other singers follow suit.  Who knew that shrimp liked to ski?  Or lions preferred flower-arranging to roaring?  Loads of fun, with comic illustrations and details (notice the glow-worm footlights) and lavish double-fold spreads at the beginning and the end.  The moral for humans: don’t assume you know what animals really like.

For more on the relationship of men and animals see our review of War Horse.  Also, “Love That Dog!” for books about our best friend.