Ever since Edgar Allen Poe, one of the most reliable publishing genres has been the mystery or detective novel.  I’m not a huge fan myself, but when the Nancy Drews were circulating through fourth grade I read a few, and many of the popular series books of the time (that weren’t about nurses) often had Secret of or Mystery of in the title.  A few years after I’d passed that phase, Donald Sobol started publishing the Encyclopedia Brown books, a series of “crack it yourself” short-story mysteries that invited readers to evaluate the clues and come to the same logical conclusions conclusions as the hero.  (I’ve heard that a new EB series is to be published, but can’t track down any details.)   Adult mystery series have featured detectives of every era, nationality, and personality quirk, and the same goes for children’s series–with additional legs, as we’ll see today.  Mysteries are not generally long on character development, but their value as literature is in sharpening a sense of logic and cause and effect.  There’s also the satisfaction of a neatly-wrapped-up conclusion, which seldom happens in life as we live it. 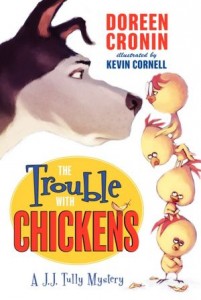 Jonathan Joseph Tully is a search & rescue dog, now semi-retired, living a bucolic suburban life with his trainer Barb.  Barb never talks, but J.J. does–plenty.  In fact, he narrates his own capers in the hard-bitten, widely imitated staccato style of a Sam Spade:

It was a hot, sunny day when I met that crazy chicken.

So hot that sometimes I think the whole thing may have been a mirage.

You get the idea.  The chicken, Millicent, doesn’t act much like a chicken but neither does J.J. act particularly like a dog.  It might have added a slightly deeper dimension if they did, but the target age group won’t care once they get caught up in the story.  Millicent is missing two of her four chicks and needs help from J.J., who reluctantly takes the case in exchange for a cheeseburger.  But it comes with chicks attached–“like fuzzy popcorn kernels with feet”–who are always getting underfoot.  for a while evidence points to Vince the Funnel, a house daschund with a nasty disposition.  But young readers soon learn it’s not going to be that easy, and some may pick up on the clues that signal a plot twist (though be aware of the POV change in chapters 10, 14, and 16 that we’re not adequately prepared for).

There are surprises in Diamond Lil, too: Lil is a fluffy white Samoyed (“I come from a long line of arctic guard dogs”) with a few secrets under her fur.  By now J.J. has established a bond with the chickens and everything looks peachy except for that curiously determined possum who keeps invading the yard.  Why does Lil, who seems like an elegant sidekick, keep thwarting J.J.’s detective work?  And does Vince know more than he’s saying?

J.J. promises to tell why he no longer does search and rescue but by the end of Book 2 he hasn’t, so rest assured there will be more.  Not brilliant, but good-humored, with clever pictures and snappy dialogue kids can read themselves. 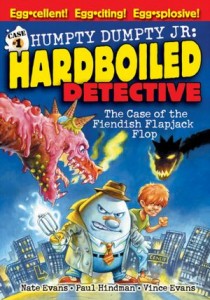 Another series for a slightly older age group is Humpty Dumpty Jr: Harboiled Detective, by Nate Evans and Paul Hindman.  There’s nothing solvable in the nursery rhyme, and therefore nothing to associate Humpty with detective work, except that the “hardboiled detective” label was just waiting for egg-sploitation (sorry, but that gives you a hint of what you’re in for).  There are  only two volumes in this series, indicating it didn’t sell that well, but those two may have an appeal for reluctant-reader boys.  Especially those who incline to gross-out humor of the Captain Underpants variety.   As gross-out goes, these books aren’t too bad, but sharp-eyed readers will love the visual gags, such as HD Jr. bending over and revealing a crack (get it?) just above his belt line.  I imagine it would be hard for an egg to keep his pants up.  Puns galore for the wordplayers: HD brandishes a wand that looks suspiciously like an egg beater (magic plays an incongruous role) and cracks cases in New Yolk City; the Queen of Hearts lives in Queens, etc.  Sight gags abound in the illustrations, along with deliciously disgusting monsters and villains, but the vocabulary seems a little advanced for the age group (franchise, vicious, egg-stinguisher).  And writing style, such as, “I love rolling through town, my wheels thrumming on the asphalt; the smells of a million restaurants wafting through my nostrils, only to have the steaming stench of the gutters hammer them senseless.  Ah, New Yolk.”  But it’s short, which qualifies it as a chapter book.  I’m not particularly recommending these, but if your third-graders wants to take one home from the library, it shouldn’t hurt.

We meet a sweeter, gentler version of the hard-boiled detective in What Really Happened to Humpty? by Joe Dumpty as 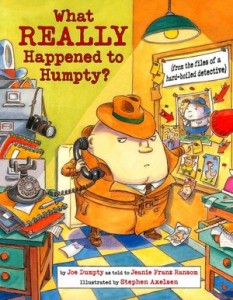 Humpty Dumpty sat on a wall;

Humpty Dumpty had a great fall.

That’s the conclusion of Joe Dumpty, the lesser-known younger brother.  It all started the day Humpty took his new post as neighborhood watchman in Mother Gooseville (a map of which is helpfully provided on the endpapers).  Next thing you know, Joe is getting a call from Little Miss Muffett–something’s happened to Humpty!  Joe races to the scene to find his brother in a terrible cracked state with yolk showing.  As all the king’s horses and men take him tot he hospital to get patched up, Joe is suspicious.  Accident?  Mother Goose think so, but gives Joe one day to prove fowl play (Sorry again–the puns just keep on comin’!).  If your preschooler has had his recommended dose of Mother Goose rhymes, she’ll have great fun with the characters in their new context.  The culprit turns out to be no surprise, but a good time is had by all and Joe has plenty to keep him busy in the future, like “my friend Bo.  Bo Peep, that is.  Now, if I were a sheep, where would I go?” 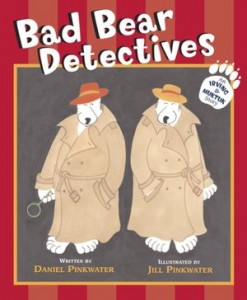 Back to four legs, there’s the Bad Bear Detectives, by Daniel Pinkwater, illustrated by Jill Pinkwater, from Houston Mifflin, 2006 (ages 4-6).  This is the fourth in the Irving and Murtuk series by the Pinkwaters, all having to do with the true-crime adventures (e.g., The Maltese Muffin) of a pair of Yiddish polar bears.  When a shipment of imported Italian muffins disappears from the docks, Irving and Murtuk are instantly suspected because of their past history with muffins.  There’s only one thing to do: “We must find out who really took the muffins,” [says Murtuk].  “We must remove this smirch from our names.”  “Our names are smirched?” Irvine asks.  “Badly smirched,” Murduk replies: “People think we are bad bears.  They think we are not to be trusted.”  “We are bad bears,” Irving says.  “We are not to be trusted.”

Suffice it to say, the bears will solve the crime in a way that leave their reputation intact.  They have yet to establish a reputation for being smart, so young readers (and with its repetition, short sentences and generally simple vocabulary, this could almost qualify as a beginning-reader book) will enjoy being smarter than Irving and Murtuk.  Even if they’re not so good at smelling.

Steve Brixton is a new boy detective, whose adventures for middle readers are reviewed here.  If your kids love mysteries, First Clues is a website devoted to mysteries written for children.  The reviews are sketchy, so you’ll have to use your judgment, but it looks like a good resource.