Interview with Keith Robinson, author of the Origins Series

Pamela interviews Keith Robinson, author of the Origins trilogy and other Christian sci-fi works. Read on for more information about Robinson, his work, and his many roles. 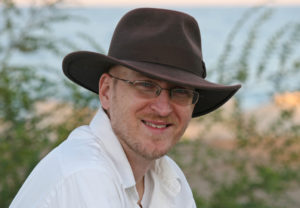 Describe the process you went through in the writing of Origins; how did you first come to consider the project?  Did you have a strong sense of God’s leading?  Did it develop as you at first envisioned? 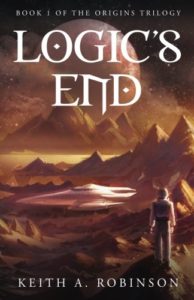 Back in 2004, I was a music pastor at a church and I was teaching an adult class on apologetics. I was impressed by the information I was learning as I did research for the class and was amazed that I’d never heard some of these apologetics arguments before. At the time, the Left Behind series was still popular, and I made a comment that someone should take the apologetics info I was learning and put it in novel format much like Left Behind did with end-times prophecy.

The idea kept percolating in my mind and the basic idea for a plot developed. Eventually, I decided to try my hand at writing and Logic’s End was the result. The novel was so well received, I began to get ideas for a 2nd and 3rd novel in what became the Origins Trilogy.

I did have a sense of God leading me. For one, I never had aspirations to be a professional writer (although I’ve always been an avid reader of sci-fi and fantasy). In addition, I’ve learned that when God gives me an idea for a novel, it just won’t go away! I find myself dwelling on it, and ideas just seem to come to me from out of the blue.

I’d have to say I feel it did develop as envisioned. I set out to write an exciting, action-adventure novel that also causes the reader to think about important topics and learn how to answer tough questions that challenge Christian doctrine. Based on the feedback I’ve received from my books, I feel that I have achieved that goal.

Were you a SciFi fan yourself before you wrote Origins?

Absolutely! I think you have to be a fan of any genre before you can be an author! I grew up with Star Wars, Star Trek, Lord of the Rings, Narnia, superhero comic books, etc. However, as I got older, I realized how nearly all science-fiction stories were based on the theory of evolution. They don’t always make it “in-your-face” obvious, but it is there. I wanted to write books that would “scratch” a Christian reader’s sci-fi “itch” while simultaneously building up their faith. So far, so good.

How did you come to your strong personal faith in Christ?

Although I was raised in a Christian home, it wasn’t until my junior year in college that I truly gave Christ control of my life. I was challenged by a friend to consider where God was in my priorities. I quickly realized that although I “said” he was first in my life, that wasn’t truly the case. So, I started making him first in my life. Then, as mentioned above, when I became a music pastor in my mid-twenties, I took theology classes and studied apologetics, all of which helped to strengthen my faith.

Can you tell us about your work as Extensions Director of The Creation Science Society of Milwaukee, and your work as an apologetics speaker?

I live in Kenosha, Wisconsin, which is a large city sandwiched between Chicago and Milwaukee. Since my first novel series dealt with the apologetics topic of Creation and Evolution, I made connections with the local creation ministry in called the Creation Science Society of Milwaukee. Eventually, I became a member of their board and, because I had become a speaker on apologetics, I became their Extensions Director – which is to say that I am one of their representative speakers on Creation/Evolution topics.

Since my second novel series deals with world religions and worldviews, and due to the 45 minute drive to Milwaukee, my time with CSSM lessened.

You have an incredibly diverse life description: husband, and father of five; long-time music teacher; and accomplished writer of complex books of some length, in addition to the work mentioned in #4.  What do you enjoy the most, and how do you juggle all these important responsibilities?

This question made me laugh! One of the ways I juggle everything is that, as a public school music teacher, I have summers off (mostly), which is when I do most of my writing and attending conferences to sell my books. During the school year, I do more preliminary work, marketing, etc. Also, my children are all teenagers now (or out of the house), so I have a little more time to work on my books and speaking.

In fact, since my children are more self-sufficient now, I decided to take part in the Colson Fellows worldview training program. This program was founded by Chuck Colson to equip Christians to understand various belief systems and to understand how to influence our culture for Christ. This 9-month program is eating up even more time, but it is giving me even more knowledge to help me write my novels in a way that will impact people.

As for what I enjoy most…I love it all! I play in the local symphony orchestras (I play viola professionally), write books, teach private students, spend time with my family, take vacations, speak a couple times a year, volunteer at church, etc. Maybe I’m able to do so much because I don’t usually watch TV! J I just try to make the most of my day and keep life in balance.

What is the target audience of your books?

I usually recommend my books for at least 10 years and older. My books are written at an adult level, but I keep in mind that I have younger readers. Ideally, my books are targeted at high school and college level students. Since I deal with apologetics topics, some of the issues discussed (Why does God allow suffering? Suicide, etc) can be a bit much for younger students. It depends on the maturity level. But there is nothing inappropriate in the books! Just deep topics.

What is your next project?

I’m currently finishing the preliminary work on a new series I’ve tentatively entitled, Star Song. It is a trilogy of books that take place in another universe where God is the Great Composer who uses music to create the universe. As such, music creates energy and light and can manipulate nature (mold rock, shape fire, create water, heal people, etc). It will be somewhat like Star Wars, but instead of Jedi masters, you have Music masters. There’s a lot more to it than that, but you get the idea.

My goal is to begin writing by no later than the beginning of 2018. If all goes as planned, the first book should be released by spring of 2019.

My website is www.apologeticsfiction.com. I have two series of books – The Origins Trilogy (Creation/Evolution topics) and The Tartarus Chronicles (world religions and worldview). Readers can purchase the books directly from my website (and get them signed by me!) or from Amazon.com. Also, readers can contact me directly through the website and learn about other authors who also write apologetics fiction.