*Secrets at Sea by Richard Peck 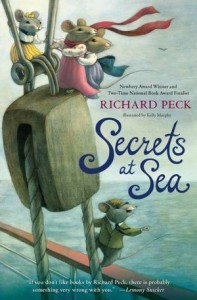 Bottom Line: In Secrets at Sea, a quartet of mouse siblings set out for the adventure of their lives: a fantasy saga that’s fun and literate and even profound in spots.

Richard Peck is a lion among children’s authors and two-time Newbery award winner.  (And apparently a friend of Sally Lloyd Jones, to whom he dedicates this book.)  He has a list of titles the length of my arm, but hasn’t dabbled too much in fantasy, especially animal fantasy.  Secrets at Sea is full-blown and full-dress: the mice take their clothes off when in the company of humans (who mustn’t suspect), but among themselves they rig out in full Victorian regalia, with manners and decorum to match.  Big sister Helena is head of her family after the unfortunate drowning of her mother and two sisters.  Two sisters are left, boy-crazy Beatrice and sarcastic Louisa, not to mention their brother Lamont, who’s on his way to becoming a juvenile delinquent.  But the world turns upside-down when their humans, the Cranstons, make plans to attend the London social season in order to give their oldest daughter a crack at matrimony.  Trouble is, the Cranstons live in New York, meaning a journey across 3000 miles of you-know-what, which has always been a terror.  Time is always running out for us mice, and water often figures in.  Helena is at her wit’s end until Aunt Fannie Fenimore advises her to stow away with the family and face what comes: “Everybody has two futures: the future you choose.  Or the future that chooses you.”

What follows is the adventure of their lives: brushes with royalty, culture-clashes, noble toddlers, unexpected alliances, shipboard romance, and of course, run-ins with the ship’s cat.  It’s a nice blend of whimsy and common sense, as Helena learns to balance old and new ways and break out of settled habits.  The details are priceless: mice eat off pennies and drink from thimbles, sit on spools at long yardstick tables.  The Dutchess of Cheddar George has bad breath and a tiara fashioned from old wire, but an air of authority that can’t be faked: “You must take charge.  You cannot leave important decisions to humans.  Times come when mice must pay their way.”   Readers are also treated to literary and literary-sounding allusions: Water, water everywhere . . . A terrible, lonesome beauty . . . The unforgiving sea. . . The romance aspect may make it more appealing for girls than boys, but it’s fun for everybody.