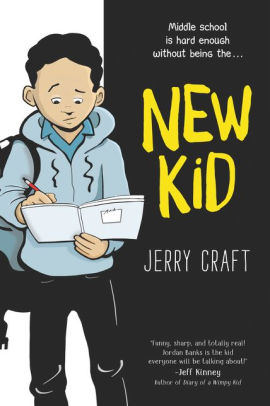 Every January, we love to discuss the merits (or demerits) of books we’ve seen getting “Newbery buzz” in the broader children’s literature world. The actual Newbery committee closely guards its discussions, so no one really knows which books are true contenders. We haven’t done too badly in past years, though. The 2020 awards will be announced January 27; you find past winners (and honors) on the ALA website.

Today, Betsy and Janie discuss two graphic novels, one a newcomer to the field and one by a best-selling graphic novelist.

Betsy: Janie, you and I both read a lot of graphic novels, and we both appreciate them as an art form. The Newbery committees appreciate them, too, and have awarded graphic novels some Newbery love in recent years (Roller Girl, El Deafo, and Flora & Ulysses). We’ve also discussed graphic novels before in our Newbery Buzz series: Cardboard Kingdom last year and a comparison of Real Friends and All’s Faire in Middle School the year before.

I think New Kid is every bit as well done as these other titles, and I also think it’s a near perfect example of what graphic novels do well that a traditional prose novel can’t quite achieve. Guts is a solid graphic novel by a best selling graphic novel creator, but I don’t think it’s quite as strong. Before we dive in, would you sum up Guts for our readers? You reviewed New Kid back in March, so some of our readers will be familiar with that title already.

Janie:  Raina Telegemeir first came to the book world’s attention with her graphic novel, Smile. Since then she’s become kind of the first lady of graphic memoir—Smile is about her experience with braces and orthodontic surgery. Sisters is about growing up with a little rival, fighting over space, parents, and relationship and finally coming to an alliance. These are experiences common to the typical 4th-6th grader, which is one reason for the books’ phenomenal popularity.

Guts goes back a little farther in time–to fourth grade, when Raina started experiencing turmoil in her GI tract. It begins with a mean bout of stomach flu and Raina’s worst experience to date of vomiting. This leads to anxiety, which leads to frequent stomach aches, causing more anxiety which spreads to all kinds of middle-grade fears (friends, puberty, grades, etc.). Raina ends up in therapy, which helps (although, in the afterward, we learn that she still experiences stomach issues, panic attacks, and emetophobia, or fear of vomiting). Graphic is a good word for this particular novel! Be prepared for scenes of Raina on the toilet and over the toilet. But her depictions of how it feels to experience such fears are striking (wavy lines, green and yellow tints, menacing shapes). Kids who experience some of the same problems—and general anxiety is a growing problem among children of this age—will find her story both relatable and reassuring.  What did you think about the graphic graphic content, Betsy?

Betsy: I certainly noticed that content, Janie! But Telegemeier manages to be discreet in the midst of being graphic. For instance, she pictures her young self on the toilet from the side. We never see the contents of the toilet itself (and, as the mother of boys, familiar with boy humor, I can only image how a young boy might have illustrated the same story!) or any more revealing body parts than the side of the hip. Thus, nearly everyone reading the book can relate to her depictions of stomach illness, complete with noises and the anticipation of running to the bathroom. Parents will be more squeamish about it than kids.

The references to puberty and girls’ periods are also fairly veiled, even while they’re frank. The word “period” is rarely mentioned; instead the girls just talk about “puberty” in general. Girls will pick up on the visual allusions to cramps, but most young boys won’t (girls with cramps look the same in the pictures as Raina looks when she has GI distress).

I think this is one of the ways graphic novels can offer a further perspective on story-telling. The creator has the ability to suggest emotions and scenarios with visual cues and young readers can interpret those in their own words. As soon as an author tries to describe actual emotions, they’re on a slippery slope to telling, rather than showing. A graphic novelist can stick to showing. What do you think about those particular virtues of the graphic novel medium? Did you think the pictures in Guts were too graphic?

Janie: No, you’re right; the pictures were not at all obscene. We’re just not used to pictures of kids on toilets unless it’s in potty-training books! I like your point about how graphic novels force the author to show not tell, because that’s the only option. It’s a different kind of challenge from a radio play, where you have to make use of dialogue and sound effects—with just a little big of narration–to tell the story.

Let’s see how that applies to another graphic novel that’s similar in theme. New Kid, by Jerry Craft, is about a sixth-grade boy facing the challenge of changing schools. To make it worse, he’s transferring from a neighborhood school to an upper-class prep school as a scholarship student. Even worse, he’s Black, and wonders if he can relate to any of the other kids. Worse still: how will they relate to him?  This is a classic middle-grades theme and I could reel off dozens of novels with a similar description. At first glance, a mom might be thinking, why does this need to be a graphic novel? Couldn’t the story be told better in a traditional format, that allows more detail and character development?  What would you say to that, Betsy? How is the graphic format of New Kid a particularly effective way to tell this story?

Betsy: I think New Kid is particularly effective at telling this familiar storyline precisely because of its graphic format. A graphic novelist can communicate some very subtle visual cues that enrich the thematic storyline without beating the reader over the head. One of the central themes in this story is “you can’t judge a book by its cover.” We’re all tempted to make snap judgments about the people we meet, sometimes even before we meet them!

In New Kid, we see this play out visually in so many different scenarios: one girl plays with puppets, and everyone in the class thinks she’s weird. The non-white students are lumped together into large minority categories with no regard to their individual uniqueness (for instance, Black kids are always awesome at basketball and live in the hood, right? Wrong!). And rich kids are all snobs, right? (Wrong!) Because those prejudices are depicted in both words and pictures, the reader can see how ridiculous the stereotypes are and how ridiculous people look when they try too hard to be politically correct. If the reader only heard the narrator’s thoughts, the author would have to be more pointed and direct. Instead, the images serve as gentle nudges to examine our own thoughts and actions and to appreciate the differences between people. After all, in an image of different Black kids, we see different Black kids with different features. Reading a sentence about “the Black kids” doesn’t afford us such a quick, almost unconscious realization; the author might try to spell it out too much if text was the only medium.

Janie: True; and it’s not that we’re dissing print at all—we’re all writers here! But graphic art should be understood as its own medium, not a dumbed-down version of literature. We should point out that Jordan, the main character, is also an aspiring comics artist, and the one-page installments of his own comics series shows how his perspective develops over time.

Betsy: So what do you think, Janie? Are either of these books distinguished enough to earn some Newbery love in a couple of weeks? After all, the Newbery committee will be looking primarily at the text, right?

Janie: I’m not sure that’s the case. In graphic novels, the text and art have to be considered together, so it kind of blurs the line between Newbery and Caldecott considerations (a few years ago, the Caldecott committee awarded their medal to a graphic novel). The rise and popularity of graphic novels has thrown a monkey wrench into deliberations, and I expect to see a separate ALA award for graphic novels appearing soon. But Newbery committees in past years have at least started to recognize that these books are award-worthy in their own right. Kate DiCamillo’s Flora & Ulysses won the gold in 2014, but I don’t consider that a true graphic novel—it was more a hybrid, with lots of text scattered among the panels. Roller Girl and El Deafo have won Honor medals, but this may be the year a graphic novel takes the gold. Personally, I’d be happy with that.

Betsy: I’d be happy with New Kid, too. I’m okay with Guts, but I don’t think it’s as strong a contender. We’ll have to wait and see! (Readers, the ALA Youth Media Awards will be announced live from Philly on January 27!)

Don’t miss our other 2020 Newbery Buzz Discussions. Round #1 was about Beverly, Right Here and Coyote Sunrise. Janie also has one round-up of titles that we’ve seen buzz about, but which we aren’t discussing in detail for our series.