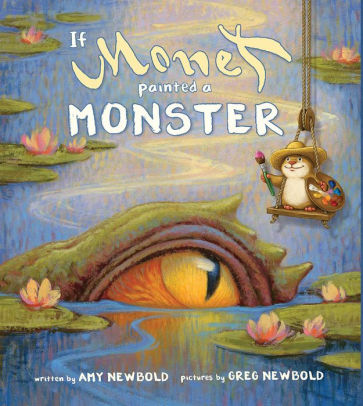 What if Monet, famous for his impressionistic series paintings of haystacks and water lilies, liked to add monsters to his bucolic scenes? You’d get the truly awe-inspiring scene detailed on the cover: a monstrous eye attached to a green spiny head rising from Monet’s tranquil pond at Giverney. What if James McNiell Whistler, in a moment of whimsy, painted his mother as a giant octopus? Some of these illustrations will make you gasp and some will make you laugh, as illustrator Greg Newbold uses the style of individual painters to incorporate a monster into a well-known example of the painter’s work. Paging through the book, a young monster-fan can’t help but develop a broad sense of art and artists. It’s all guided by the adorable hamster who demonstrates media and technique and invites the reader at the end to compose his own monster-portrait. A brief bio of each artist rounds out the volume, and here’s my one complaint: The thumbnail illustrations that accompany each bio should show the original painting, not the monster version.

Find more artist fun in If DaVinco Painted a Dinosaur and If Picasso Painted a Snowman.

Alberto and Diego were born only a year apart, but couldn’t have been more different. Alberto decided early on that he was an artist like his father—serious, hardworking, and quiet. Diego was fun-loving, outdoorsy, and a bit of a scamp. At first their paths diverged: Alberto soaked up the art scene in Paris and fell in and out of love with surrealism. Meanwhile Diego got into trouble back in Switzerland. When his exasperated mother sent Diego to Paris (where big brother might give him some direction) their lives began to converge again, even though one brother still had no interest in art and the other was struggling to find his message and medium. When war intervened, Diego remains in Paris to guard their studio from the Nazis while Alberto regrouped in Switzerland. Only when the war was over and the brothers reunited did each come into his own while contributing to the other’s success. If you don’t recall hearing of Alberto Giacometti, you’ve seen his elongated bronze figures with the huge heads and feet in every big-city art museum. But Diego also became an artist of sorts: his craft enabled Alberto, and Alberto’s vision inspired Diego. Their story is a powerful testimony to human creativity and family bonds.

Recommended for: ages 6-up

Chris Raschka, the much-awarded author/illustrator of over sixty books, is also an accomplished violist and opera-lovers. His bright and blocky, finger-painty style is not one I always admire.  Nor is The Magic Flute my favorite opera plot, employing as it does elements of occultism and Freemasonry (though the music is exquisite). But those two equally-awkward elements come together in a scene-by-scene exposition of the opera that’s fun and oddly beautiful. A confusing cast of characters is simplified by a color scheme that helps sort them out. A three-paragraph introduction by the author expounds possible themes in an engaging way: “[Our heroes] travel in a strange land, though the night, and win the day. We might conclude from this that the day, which is reasonable and clear-sighted, stands above the night, which is unreasonable and full of passion.” But not so fast! On to Act I, Scene I, where Prince Tamino is fighting a huge snake! (Nothing like getting right into the story.) The plot unfolds from there with each turn of the colorful pages: straightforward narration punctuated by asides in speech balloons. It would have been nice to include selected YouTube links to selected moments, but interested kids and parents can look those up for themselves. A fun introduction to one of the world’s great operas, worth reading more than once.

We are participants in the Amazon LLC affiliate program; purchases you make through affiliate links like the one below earn us a commission.