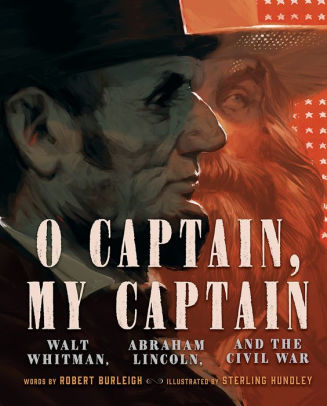 O Captain, My Captain encapsulates the Civil War through the eyes of its most famous poet.

Recommended for: ages 8-up

There is no more dramatic, emblematic, and poignant period in American history than the civil War.  And no period features more compelling characters, foremost among them President Abraham Lincoln.  Lesser known but no less interesting is the main character of this outstanding picture-book history: Walt Whitman.  Already known as a poet and something of an eccentric, the man with the baggy suits and flowing gray hair left his home in Brooklyn, first to locate and assist his brother George who had been wounded in battle.  But as the war dragged on, Walt moved to Washington to do what he could to comfort the wounded languishing in the many hospitals.  He felt an affinity with President Lincoln and saw him often enough in what was then a small town, but there is no record of the two ever having met.  Still, when word came of the President’s fatal shooting at Ford’s Theater, Whitman felt as though the shot had wounded an entire nation.  He tried to put into words what he felt, and the result was two of his best known poems.

The striking illustrations are both realistic and symbolic; Lincoln larger than life (literally growing out of his log cabin on one double-page spread), Whitman often in shadow, always observing and writing.  He “wanted to give voice to this bewildering convergence of life and death,” and every page of text leads off with a quote from him.  The combination of text and illustration is somber and rich—and what the subject deserves.