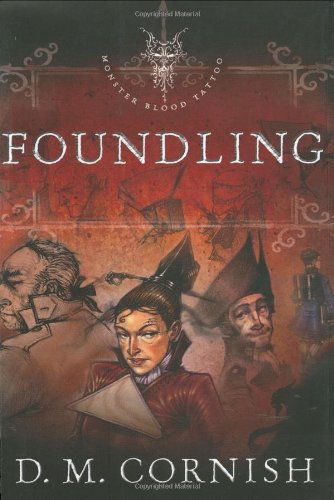 Rossamund Bookchild dreams of being a vinegaroon, one of the crusty sailors who sails the acid-laced, monster-ridden vinegar seas of the Half Contintent. It’s not an unlikely dream considering he has grown up at Madame Opera’s Estimable Marine Society for Foundling Boys and Girls. Two of his favorite teachers are old salts. Yet as readers realize within the first chapter when the school bully trounces and injures Rossamund in a fight, Rossamund is hardly militant. No, Rossamund is a dreamer and a rather trusting one at that. When he is chosen to leave, it is to join the lamplighters who keep the roads of the empire.

Foundling is a journey tale.  Rossamund is sent out into the world beyond his native Boschenburg by a group of loving teachers.  But from overheard conversations, readers and Rossamund realize they’re none too happy with the sending and are worried for Rossamund.

If readers weren’t worried by the first chapter’s trouncing, they should be when Rossamund trustingly boards the wrong ship.

The unsavory fellow seemed to hesitate at this, then gathered himself. “So ye’re me lively cargo, lad?” he purred, giving a saucy wink. “Bit unfortunate about yer name, but there ye ‘ave it. Still! Grateful to ‘ave met ye all th’ same.” He bowed, removing his tricorn to show gray, greasy hair pulled back in a stubby baton. Patting his own chest, the captain continued. “I be Rivermaster Vigilus, yer ever so ‘humble servant.”

As a reader, Foundling gave me flashbacks to Kidnapped and other stories. The world was interesting but Rossamund had more the mettle of a hobbit with the naïveté of a child. My attention lagged. But don’t put the book down or walk away. The adventure is only beginning.

Before long, Rossamund will have realized his error, jumped overboard, lost his hat, and begun his own way across country to join the lamplighters. He finds an unlikely traveling companion in the Branden Rose, a female “lahzar” who uses lightening to fight monsters. And monsters. Rossamund meets monsters and realizes, to his horror, that not all monsters are as bad as they appear. It’s a question the will lurk throughout the trilogy.  What is a monster, really?

In a few months [Rossamund] had seen so much death —violent and stark and shockingly quick —nothing like the glorious end that his pamphlets described for its heroes. The life of adventure was a life of violence. He had been seeking this, but now found he did not want it; men died, monsters died, and only grief and self-doubt remained. . . . what if the foe is one only because we make him so?

In the second book, Rossamund has finally joined the lamplighters.  He’s earned a new nickname, Master Come-Lately, due to his late arrival at Winstermill, the lamplighter’s headquarters.  It might seem bad, but anything is preferable to the flower variations of his own name.

Rossamund throws himself and the reader into the world of the lamplighters.
Characters return from the first book.  New characters are introduced including Threnody, a very plucky young wit (another type of lahzar) who joins the lamplighters to escape her domineering mother.

As Rossamund comes to enjoy his new life, he begins to realize that all is not well with the Lamplighters. The conniving secretary who has recently risen through the ranks seems to be in league with the surgeon. It’s a world of tangled intrigue and appointments where virtue is not always rewarded and the truth is hidden.

Rossamund stumbles straight into this web when he finds a man-made monster, or reven-man in the bowels of Winstermill.  Political intrigue and scheming reign in Lamplighter and soon Rossamund finds himself packed off to serve very near the frontier at a tiny lamplighters’ outpost.

The book ends in a climax, but it’s one that readers will be expecting.  Ever since the first book, Cornish has been drilling definitions and new words into our vocabulary as well as planting doubts.  And while we knew Rossamund would be a lamplighter (it’s the name of the second book!) we also knew that Factotum -the term for a servant of a lahzar- was the name of the final book in the trilogy.

Factotum brings readers and Rosamund to Brandenbrass, a bustling main city. They also confirm a suspicion that intuitive readers will have been harboring since the first book. It’s an intense book and yet a satisfying conclusion to the trilogy.

Monster Blood Tattoo is fascinating in its world-building. It began with 23 notebooks about the Half Continent that author/illustrator D. M. Cornish created. An editor saw them and convinced him to write a story.

I’m reminded of Tolkein in the complex appendixes which follow each book. Unlike Tolkein though, each chapter begins with a careful definition of a word that will help readers understand something in the following chapter. Also, rich illustrations show exactly how Cornish imagines his creations and characters.

The characters are complex, but this is a whole trilogy without romance or language. There is plenty of action and violence which might deter more sensitive readers, but for a lover of fantasy, here is a rich world to discover.

Am I the only one who thinks so? No . . . listen to Lloyd Alexander writing about Foundling:

D. M. Cornish has created a remarkable new world, complete in every detail, totally convincing. Even more, he has peopled this amazing world with equally amazing characters, startling turns of events, constant excitement, and a rich palette of deeply felt emotions  It’s an epic in the making; and we can all be glad we were present to see it begin.

Sadly, Alexander did not live to see the end of the trilogy, but his words were an encouragement for me to press beyond the opening chapters of Foundling.

In the Monster Blood Tattoo series, enter a complex world where men and monsters clash, yet not all monsters are as they seem. Again and again, beauty and character are shown to be inner qualities that don’t always match exteriors or appearances. Friendship and loyalty are powerful themes in this coming of age. What’s more, it is free of many issues that weigh down modern fantasy. This is high fantasy —yet with much more science than magic, akin to the world of Megan Whalen Turner.

Unfortunately, despite two different publishing attempts, the series is currently out of print in the U.S.. Amazon does have copies available, and I wouldn’t be surprised if you find them in your local library system. —The first editions were well publicized and made their way into my library catalog.—

Know that is it is well-worth the effort of tracking down the series. And thank you to Cathy H, who first recommended this to Redeemed Reader! I’ll leave you with her glowing recommendation.

So far, everyone that I’ve been able to finagle into reading this series has loved it.  I often compare it to Tolkien’s Trilogy.  Here is a unique world which is fully realized, characters which one falls in love with, and a story which keeps one turning pages (while ignoring any and all household chores).  But the book and story are not derivative in any way.   My boys, 18 to 10, were enthralled.  Oh, did I mention it has amazing illustrations done by the author?  Yes, yes it does.  And if that is not enough, the audio book is outstanding!   My literature-loving husband, who generally sniffs at anything less than a classic, started stealing our audio book CDs so he could listen ahead.  It’s the kind of audio book one should not listen to while running errands or going to appointments, as being late is guaranteed (from sitting in the car listening “just a little longer to see what happens”).