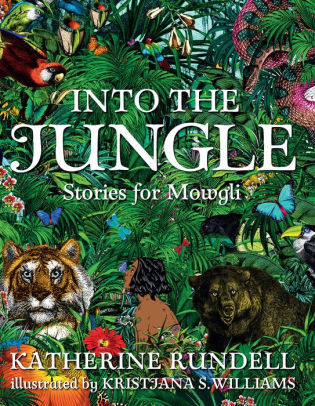 In these four tales inspired by Kipling’s Jungle Book, Mowgli the man-cub learns the backstories of his fellow creatures.

*Into the Jungle: Stories for Mowgli by Katherine Rundell.  Walker Books, 2018, 231 pages.

Recommended for: All ages as a read-aloud, ages 8-12 as independent readers

Rudyard Kipling’s Jungle Book ends with Mowgli, the man cub, returning to his own people.  But before that happened, he must have had many more adventures with his wolf-pack siblings and the other animals in the wild.  And between those adventures, wiser heads, including his wolf parents, would have had stories to tell him.  The four tales recounted here, loosely strung together with a developing crisis in the jungle, offer backstories for some of the main characters in Kipling’s original: how Bagheera the panther escaped from the rajah’s menagerie, how Kaa the python charmed the public during his brief performance career, and how Baloo learned to look lower than his knees. “Back in the years when Baloo was young, the large animals of the jungle did not speak the language of the smaller”–but the large bear will have reason to be glad he learned the mouselike jerboa’s lingo.  Breaking the language barrier turns out to be a milestone, not just for Baloo but for the entire jungle.  “He felt something prickling on his tongue.  It was, he thought, language, struggling to be born.  Or possibly a stray ant.”  Communication among animals, even though some of them eat each other, reminds them all that “We be of one blood, ye and I.”

I was afraid these might turn out to be updated, too-cute stories with contemporary “relevance” or anti-human bias.  But the narrative has a classic, Kiplingesque sound to it, gently humorous and warm.  The handsome volume comes with a ribbon market and full-color double-page illustrations that combine Victorian-style nature prints with collage.  With their engaging characters and whimsical voice, these tales can be enjoyed over and over, the best test of a family read-aloud or bedtime storybook.

Also by Katherine Rundell: The Explorer