Reading Aloud to Tweens and Teens: A Guest Post about Kate Seredy’s books

Dawn Garrett joins us today to discuss reading Kate Seredy’s books aloud to her tweens and teens. For more about Dawn, see her bio below the post.

I was first introduced to Kate Seredy (Sher-edy) via blogs lamenting the lack of accessibility to one of her books in particular, The Chestry Oak. It had been long out of print and one of those magical unicorns that was so hard to find because those who owned copies understood its worth and kept it. I assumed I’d never find one, but I was intrigued by her story. 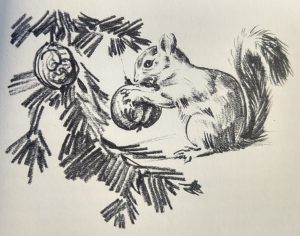 Born in Hungary, Seredy nursed in Paris during the First World War. She returned to her homeland and used her artistic skill to illustrate books before eventually immigrating to the States in 1922. When you see books she illustrated, the drawings immediately capture your attention for their detail, beauty, and fitness for the story. She presents culture – Hungarian or American – in a vibrant, yet traditional way. In fact, her illustrations are so wonderful she was awarded a retroactive Caldecott Medal for her work on The Christmas Anna Angel by Ruth Sawyer. 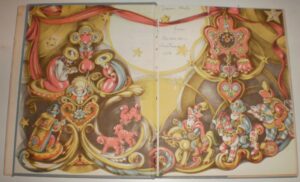 Her biography is important because it informs the catalog of her writing. While she continued to illustrate, she was asked to write stories, too. What amazes me is her lyrically beautiful writing in her non-native language. She knew no English when she immigrated, yet I can say that her artist’s eye translated to the written word with a poignancy and sense of wonder rarely found in children’s books. Beyond the brushstrokes of vocabulary and syntax, the ideas she presents are worthy of contemplation. Seredy gives us the whole package; I quickly saw why those bloggers so raved about her books.

Her Books in our Home

Over the last several years, we’ve been reading Seredy books during Morning Time in our homeschool.  My children were upper elementary to middle school age when we read A Tree for Peter, The Good Master, The Singing Tree, The Chestry Oak, The White Stag, and The Open Gate. 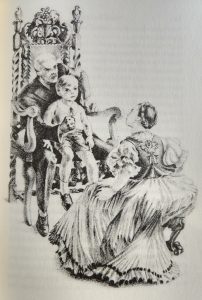 Continuing to read aloud with busy pre-teens and teens can be challenging, but is completely worthwhile (even when they’re chanting “Cry! Cry! Cry!” at you every chapter). Some days we would have time for a leisurely read through a chapter while others we could read only a paragraph or two. That’s OK. The important act is to carry on with whatever the day gives to you. The story links our heart to theirs and the ideas feed our souls; it isn’t the pace at which we read, rather the fact that we read together that matters.

Story finds its way into our consciences and occasionally into our conversation. “Remember when ….”  We’ve been reading books aloud together for many, many years. We read some spectacular stories when the children were younger: Wind in the Willows, Little Britches, and Bambi to name a few. While my husband and I remember those stories quite well, they’re not the stories the children best remember. They remember reading together, true, but the stories they remember are the ones we’re reading now. The stories they’re introduced to as they’re finding their individual identities and figuring out who they are. Seredy’s books are perfect for that time in their lives. 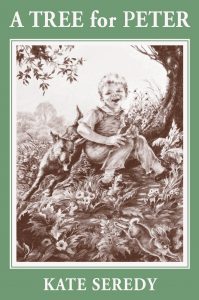 A Tree for Peter

We started with A Tree for Peter. It’s short and I wasn’t sure about Seredy despite what I’d read.  It was an excellent introduction. Peter lives in the slums with his mom and it’s really hard. He sees a rich boy on a train that is passing quickly through the shantytown where he lives. We’re introduced to many characters – Peter’s mom, a police officer, and a Jesus figure who advises Peter from time to time. Christmas is the climax of the story and changes everything, from the shantytown, to Peter’s hopes, to his future as an adult. This is the one book that I have some concerns about, theologically, but they are minor concerns and I still recommend it. 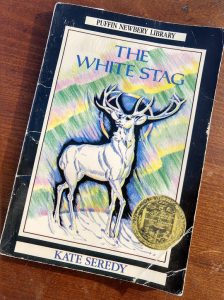 We decided to try The Good Master next. This was a wrong step. We loved the story, but I think we should have read The White Stag for which Seredy won a Newbery Award and the Lewis Carroll Shelf Award. The White Stag is … different from her other books. In it she relates the legendary story of how the Huns and Magyars came to Eastern Europe as told her by her father. The story starts with the dispersion following the Tower of Babel. We meet Bible characters like Nimrod and his sons. 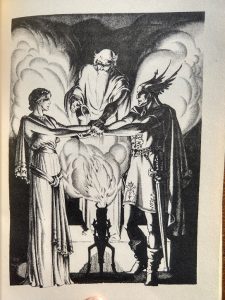 There is an animal sacrifice, there is the magic of following the White Stag looking for a homeland. It is fascinating and helpful background when reading some of the other novels, and even though it is a harder read than the others, don’t let that deter you. 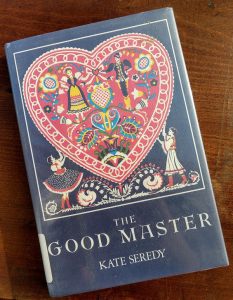 Back to The Good Master, then. A farming family in Hungary, respected in their community, is invaded by an imp of a niece named Kate. She brings trouble wherever she goes. Her mother has died, her father can’t figure out how to deal with her, and so he sends her to his brother.  There are hijinks and fun galore. 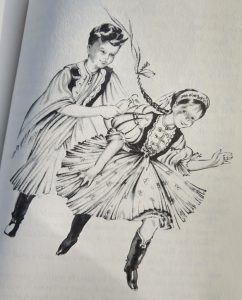 This is the most out and out fun book of the Seredy we’ve read. Christmas also figures in the story as a turning point in the year – the clothing, gifts, and community coalesce as Kate finds her place in the family. There is an issue with the portrayal of  Gypsys in this book – the Romani in one scene are playing music for the county fair and in another kidnap Kate. We took the opportunity to talk about how people are portrayed and why. Overall, though, the book is lighthearted and fun. 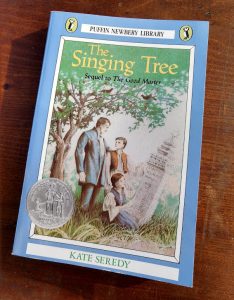 The tone of the sequel to The Good Master, The Singing Tree, quickly becomes more serious. In the days leading up to World War I, the son of the house is almost of age to go to war. As they live in the Austro-Hungarian Empire, they have real concerns about this. Father, Marton Nagy, goes off to war in place of the son. 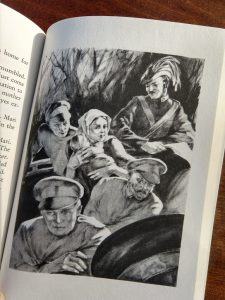 War and what war does to men and the chaos of war is a stark theme in this book, The Singing Tree is a metaphor for beauty and rest found even in the most fraught circumstances. Another major theme in this book is about expanding our homes to those without. It began with Kate and her father in The Good Master, but continues with POWs and war-orphaned children in this.  The darkness of war is clear, the joy of family was clear, the universality of mankind was clear. If there is a more needed message these days, I’m not sure what it is. 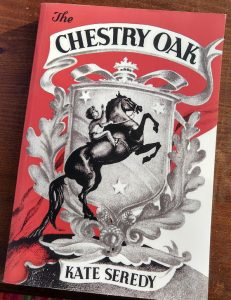 My favorite, though, is The Chestry Oak. It’s the book that caught my attention as the other bloggers raved about it, and by the time I was ready, Purple House Press reprinted it. Set in an imaginary Czech dukedom, the young Prince Michael aided by his faithful nanny, Nana, matures in the days leading up to and into the Second World War. He learns to love his people, his country, the land and animals, and their stories through Nana’s careful teaching. His mother is gone to the city and doesn’t plan to return; she has done her duty by producing him. His father may or may not be working with the Nazis, there are a lot of them in the castle. 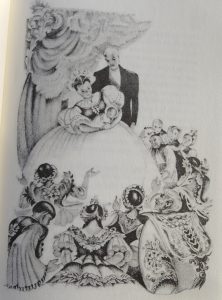 Yet it isn’t intrinsically a war story nor a mystery. It’s a boy story about how his life affects who he is and who he will become. It’s a story about a people displaced within the place they love. I cried in every chapter. It is a beautiful, beautiful story and if you read only one Seredy, make it this one. Then you’ll want to read more.

The last Seredy we read was The Open Gate. If we think an agrarian, returning to the land and away from cities is a new 21st Century idea, this story disabuses us of the notion. Set firmly in America – in Orange County New York in the 1940s, the oh-so modern Preston family “accidentally” buys a run-down farm at auction due to the less-than-modern Gran’s trickery. This story is about a family becoming part of a community. The community comes in and teaches them how to farm. The Prestons, in turn, help two families; for one of those families Christmas is a time of sadness but the Prestons help them to heal. 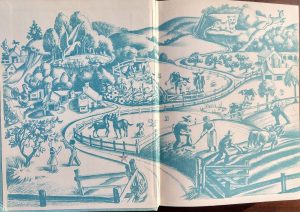 This book isn’t as poetic as the others and is more dated in language – even the names of the children are Dick and Janet and there are some “golly!”s thrown in for good measure. It is still deserving of a reading if you can find a copy – as far as I know it hasn’t been reprinted.

I wish I had space to explore the language and ideas further, but I would encourage you to read these books. Read them with your tweens and young teens. Talk about what it means to be a person, a family, a community, a people, to have a place. In nearly all of Seredy’s books, Christmas is near the climax of the story. Why? Because the incarnation is part of answering those questions; Seredy’s books give you a framework to discuss the questions your 10-14 year olds are asking.

*image credits to Dawn except for A Tree for Peter cover image and the endpapers to Christmas Anna Angel, both of which are from amazon.

Dawn Garrett lives in Central Ohio with her husband Jason and their three always-homeschooled children, ages 14, 13, and 11. In her homeschool, she and her children learn about God and His cosmos by studying the seven liberal arts in order to know Him better, imitate Him and His ways, and share about Him with others. Her home blog – about books school and life – has been at ladydusk since 2001.

She is the author of the free ebook: I Am, I Can, I Ought, I Will: Charlotte Mason’s Motto Explained for Upper Elementary Students. Dawn is also the Community Manager for pambarnhill.com and one of the curators of Charlotte Mason IRL on Instagram.

Readers, have YOU read Kate Seredy’s books? Which one is your favorite? Tell us in the comments!