Wilder Good, now thirteen, continues his outdoor adventures with his biggest challenge yet. 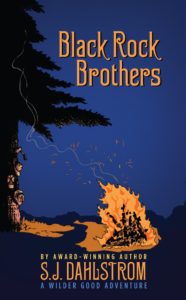 We first encountered young Wilder Good in Elk Hunt, his first-ever big game hunting expedition in the Colorado mountains.  Soon after, (in Texas Grit) Wilder spent a summer in west Texas on his grandfather’s ranch, learning how to rope and brand cattle (with lots of manure thrown in).  In Vol. 3, Wilder and Sunny, the 12-year-old developed tender feelings for his pretty neighbor, an attraction that grew stronger when they worked together to meet a life-or-death challenge.  The Green Colt (#4) sent Wilder back to grandfather’s ranch, where he received the gift of his very own horse to break in and care for.

There’s more to Wilder than hunting, riding, and wrangling, though.  He reads classic literature and tries his hand at poetry now and then.  In Black Rock Brothers, he has set himself a task that has more than a whiff of legend about it.  His family owns a treasure: an onyx stone that had been carved into a lance-head by a Native American long ago.  Wilder accidentally broke it.  Now he wants to find the rock from which the stone was probably carved, chip a piece of onyx from it, and make a new lance head.

The quest holds added significance for him because of his mother’s cancer diagnosis.  The artifact had been a gift to her from her own father, and though she’s forgiven Wilder for breaking it, he needs to do this for himself.  Restoring the rock isn’t the reason he gives for proposing a three-day expedition into the wilderness by himself, but his parents realize this is something he has to do.  They give their permission provided he takes his best friend along with him.  Big is the son of the preacher at their church, a natural outdoorsman and willing partner.  But the boys have to take someone else along too: James, otherwise known as Corndog, a foster kid up for adoption by another family at the boys’ church.  Corndog is an awkward lad who doesn’t fit with Wilder’s idea of a pal.  But it’s take him or stay home—easy choice, when those are the terms.

Black Rock Brothers is a classic adventure tale, with close calls, big mistakes, near misses, and last-ditch efforts to meet the goal.  The success or failure of the mission is almost beside the point; it’s in the journey that the boys will discover their personal strengths and weaknesses.  It’s a rewarding journey for anyone, and may just inspire some enterprising boy to put down the playstation and start dreaming of his own quest.   I use the gender-exclusive term deliberately: many girls will enjoy this adventure, but it’s a book about boys, and their particular need for self-testing.  The pages practically sweat with effort, and that’s not a bad thing.