The Language of the Universe

The language of the universe is math. Little else in the natural world reflects such a unique combination of truth, order, and beauty–all of which point to God’s handiwork. We can praise God for math!

When kids hit upper elementary, many of them suddenly start complaining about math. Let’s think about it from their perspective: math has been relatively straightforward for several years until Bam! Within a year or so, basic addition, subtraction, multiplication, and division have become:

… and Variables (Letters in Math Class??)

It’s no wonder kids start to balk. After all, don’t we have calculators and computers now?

These books won’t pull the wool over your kid’s eyes. They’re obviously about math. But they are interesting and fun math books. Some of these books provide terrific explanations of particular concepts while others offer a big picture view. All are geared for the middle grades (4th-8th), but some are accessible to younger kids as well.

Try reading a few over the summer instead of doing math worksheets for reinforcement. If you’re a classroom teacher or home educator, try reading a selection each week during the school year or having a “reading festival” on a May day when everyone is ready to be done with school already. And remember: all this marvelous math is just one facet of God’s amazing creation! 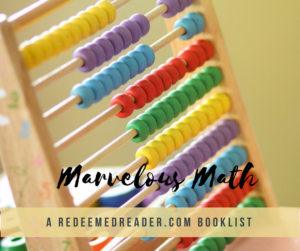 What math books have you used with your kids and students? Tell us in the comments. We’d love to add to our list!