*The Book of Boy by Catherine Gilbert Murdock

The Book of Boy breathes life into the squalor and splendor of the late middle ages, with the tale of a parentless child and a mysterious pilgrim on a search for relics. Ages 10-up 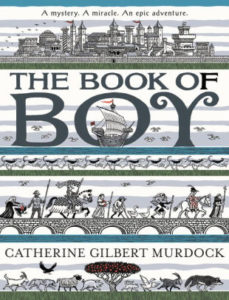 But the boy has no idea where he began, as he has no father or mother.  He was found in a tree, naked and shivering, by kind Father Petrus, who bathed him and clothed him and warned him many times never to let anyone see him unclothed.  But Father Petrus was carried away by the Black Death, like so many others, and he never even gave the boy a name.  He’s just Boy, now serving as a goatherd at the Manor.  Boy is in the apple tree snatching the only withered fruit left over from fall, when he’s notices a stranger watching him closely.  The stranger, dressed as a pilgrim, calls himself Secundus, and he’s very interested in Boy’s climbing ability.  Before Boy knows what happened, he’s on the road with Secundus, engaged for a six-day journey.  Part of his job is to carry a pack containing the precious thumb of St. Peter, and one advantage is that the pack disguises his unsightly hump.  But the disadvantage is that Secundus intends to add to that pack, with no less than five more relics of St. Peter, and he’s not overly scrupulous about how he gets them.

The story is set in a definite place and time: central France, 1350, during the holy year of pilgrimage.  Europe is in a bad way after the plague and invasions and earthquakes and destruction, but grace remains—and, unbeknownst to him, Boy is an example of it.  He thinks he’s a monster because of his hunchback, but that is clearly not the case.  What he is remains to be seen.  As for Secundus, his journey is much more than a standard pilgrimage: it’s no less than epic.

The thousand years (more or less) we know as the “Middle Ages” were a time of violence, superstition, and squalor, as well as a time of fervent faith and shimmering splendor.  The supernatural haunts this cavalcade of pilgrims, villagers, priests, monks, renegade knights, and robbers.  Hell seems to have broken through to earth at times—but so does heaven.  The narrative starts a bit slow, but by the last chapter readers should be riveted . . . and a bit misty-eyed as well.  Modern-day readers may bristle at the childish faith given to relics, and saints receive more attention than Christ.  The same is true of another starred book from year before last, The Inquisitor’s Tale.  But unlike that otherwise-excellent novel, this faith in Boy is also child-like, and firmly grounded in Christian tradition, if not sound Christian doctrine.