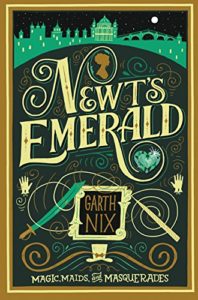 Truthful Newington, daughter of a retired Admiral, lives in the English countryside where nothing much happens. She longs for the excitement of city life, and after a precious magical heirloom is stolen from under her nose on her eighteenth birthday, she receives adventure in spades. Truthful sets out for London, intent on finding her family’s emerald, a stone which is supposed to help one control the weather. Once in London, it becomes apparent that a proper lady cannot go gallivanting all over the city looking for a stolen jewel, so she reluctantly disguises herself as her French cousin, Henri, in order to freely search. Along the way, she makes the acquaintance of Charles, a handsome but aloof army man who agrees to help “Henri” find the emerald, and who may just be clever enough to not only locate the missing stone but to be a fantastic match for the wit of Lady Truthful Newington.

Part Jane Austen, part Scarlet Pimpernel, part heist novel, and part magic, this story is a delightful read for those who enjoy Regency pieces. Nix weaves fantasy elements into his story with a skilled hand, from the idea that all well-bred families possess the ability to work some magic, to the hilarious mustache Truthful wears which helps build a glamour so she appears more like “Henri,” to the distinction between good and malignant magic. It would be easy for Nix to use magic as a solution for everything in his book, but he reminds readers through the words of Truthful’s guardian that if something can be done without magic, it should be.

While this book is lovely and well written, it does contain some cautions. Several characters swear, and only apologize when they know a lady is present. Alcohol is consumed in the story and talked about frequently. There are also several action sequences where shots are fired, punches are thrown, brawls occur, and murder is attempted (although thwarted). The villain perishes by an arrow through the eye and a nasty fall. The magic system is woven seamlessly through the narrative, but some families might find talk of “divining an outcome” too much. The only thing that is ever really “divined” is that a large group of people will attend a party.

If you have an older teen who enjoys Regency drama, and who has read things like Shakespeare or The Scarlet Pimpernel, this would be an enjoyable read. If you are looking for something a bit tamer by the same author, try Garth Nix’s Frogkisser!

Cautions: Language (Damn, one instance of a villain using the word hell-bitch, several uses of “My God”), Violence (see above), Drinking (see above), Magic (see above)