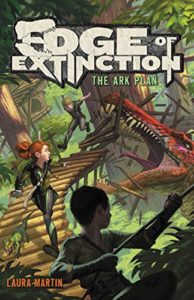 Sky Mundy and her friend Shawn have lived their entire lives underground in a rigidly controlled environment: recycled, purified air; regulation clothing; strict schedules and work detail as a consequence for tardiness (and many other infractions). Ever since the cloned dinosaurs grew too large and caused a dinosaur pandemic, the human race has been forced to live underground in a few large bunkers. The original Noah had the idea to rescue those that survived the pandemic; the third Noah since then is maintaining rigid control for the good of the human race. Or is he? Sky’s father went missing 5 years ago, and she risks a deadly adventure four times a year when she tries to intercept the compound’s mail topside before it disappears down a chute to be scanned and searched. Will there be news of her father? When Shawn discovers a mysterious message from her father inside a compass–a message that hints all is not well in the compound, Sky knows she must risk more than a quick reconnaissance mission: this time, she’s leaving the compound to risk the dinosaurs…for good. Like a true friend, Shawn joins her in her deadly quest. 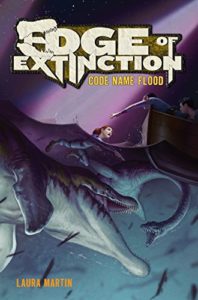 Laura Martin has cleverly adapted the Jurassic Park themes and ideas for a middle grades audience in this nonstop high adventure. Ports (similar to small tablets), treetop dwellers, an underwater lab that is doing genetic studies on dinosaurs, marines who kill first and ask questions later…. this is a series that is hard to put down! Characterization is predictable, but that isn’t the point. The machines and genetically modified dinosaurs are the point! This series is a nice bridge for tweens who aren’t ready to dive into “real” dystopian fiction with its harsh edges and despair, but who still enjoy a little of that element as the authority structures start to crumble within an autocratic society. Young readers will get a taste of sci-fi, fantasy, and dystopian literature all in one. With a new Jurassic Park movie hitting theaters this summer, expect interest in dinosaurs to be high!

There is one semi-significant caution. It is worth mentioning that the allusions to the biblical flood narrative aren’t accurate: in the Bible, Noah is an agent of God, not the Savior himself. Nor is he a nefarious villain; rather, he is described as one who found favor with God. The references to the dove’s journey out from the ark are well done, but the implication that those who didn’t earn a trip on board the ark were mistreated is not. Evolutionary talk abounds (dinosaurs and other animals evolving, adapting, going extinct), but it is entirely in keeping with the futuristic/dystopian plot narrative. Strong readers who read quickly and have a good worldview foundation won’t be bothered by this series, but those who spend more time mulling over all the implications might have some questions.

For a very similar story that is more steampunk and swaps in dragons for dinosaurs, see Fires of Invention. For a mega list of related titles, see our recent Here Be Dragons Mega Fantasy and Sci-Fi List!