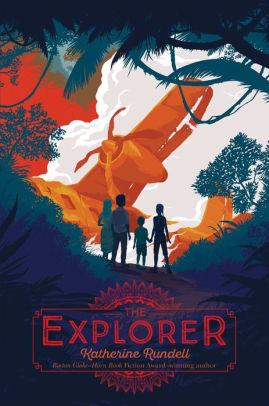 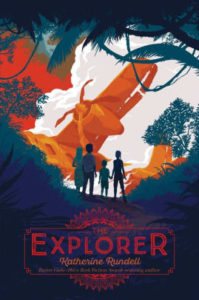 Four children take off in a six-seater plane, headed for Manaus, Brazil.  They don’t know each other and the reason for this journey isn’t very clear, but soon it won’t matter.  Because their pilot convulses in a seizure, slumps over the controls and crashes the little plane into the thick canopy of the Amazon jungle.  Miraculously, all four passengers survive, but the plane (and pilot) do not.  On their own in this “green hell,” 13-year-old Fred, caustic Constantia (“but if you call me that, I’ll kill you”), gentle Lila, and Lila’s 5-year-old brother Max, struggle to survive by pooling knowledge, skill, and mother wit.  Which may not be enough.

It sounds like Hatchet meets Lord of the Flies, until the quartet stumble upon a ruined city with a population of one: a taciturn, surly white man they come to know as the Explorer.  The man gradually warms to them—at least enough to pass along some helpful survival tips—but who is he, what is he doing here, and how will they escape?

The narrative will keep pages turning as the kids go from one perilous escapade to the next.   But once the Explorer comes into the picture, it’s more than a survival/adventure tale.  He has, to say the least, an interesting take on man and nature.  It’s not quite the usual “man as predator” meme encountered in National Geographic specials, but a profound respect for the art of creation.  Coming upon his first view of the mighty Amazon, Fred is struck with wonder: “It looked like someone had designed it with a purpose in mind: someone who wanted the world to be as wild and green and alive as possible.”

The Explorer’s character requires some suspension of disbelief: a man living alone in the jungle for years would be even crazier than the character appears.  The worldview is not explicitly religious, and there’s a passing reference to evolution.  Still, the story and its title character offer some worthwhile observations along with the thrills, ending with

“Every human on earth is an explorer.  Exploring is nothing more than the paying of attention, writ large.  Attention.  That’s what the world asks of you.  If you pay ferocious attention to the world, you’ll be as safe as it is possible to be.”

Cautions: Language (one “damn,” several misuses of God’s name—which might not all be misuses)