A middle-school bully gets a chance to start from scratch—if only he can escape who he was before. 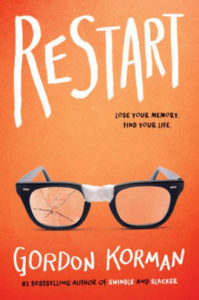 13-year-old Chase Ambrose doesn’t remember what he was doing on the roof just before he fell off.  He doesn’t remember anything of his own family or friends or school.  His recall of generic information is okay: how to talk and read and interpret social cues, such as when a girl he apparently knew before dumps a frozen yogurt on his head.  Obviously, she’s mad about something.  As more clues come back he realizes a lot of people have reason to be mad at him, because he and a couple of buddies on the football team specialized in terrorizing losers.  But he’s not that person any more . . . is he?

Korman knows how to appeal to this age group with high-concept plots and intriguing mysteries that keep the reader guessing.  Restart is not an action-packed, danger-filled narrative, but middle-graders will be just as anxious about Chase’s former life as he is, and wonder right along with him if it’s possible to change.  His character is open to interpretation: was a decent individual lurking under that menacing exterior all along? Did the fall shake up his moral compass as well as his memory?  Some of the characters are rather stereotyped and the ending is a bit too feel-goodish, but most middle-graders will find this a compelling read.