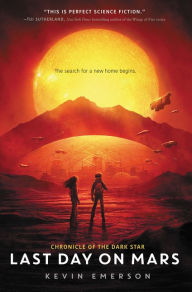 A guest post by Sherry Early, of the excellent Semicolon blog:

Really good science fiction for middle grade and young adult readers is hard to find these days. I mean the old-school, space travel, fighting-space-aliens, survival-in-a-hostile-environment kind of science fiction. Hunger Games wannabes are easy to find. Old-fashioned Heinlein/StarTrek-type stories are not as popular.

Last Day on Mars is one of those old-fashioned space travel stories with an apocalyptic twist. Liam Saunders-Chang is one of the last humans left on Mars. The earth has already been deserted by human beings and destroyed by our sun which is slowly going supernova. What’s left of the human race is on a quest to colonize a new planet in a new galaxy, and Liam and his family, along with a few other scientists and technicians, are scheduled to leave Mars on the last starliner out of the solar system just before Mars, too, is destroyed by the exploding sun. It’s Liam’s last day on Mars, but “before this day is over, Liam and his friend Phoebe will make a series of profound discoveries about the nature of time and space and find out that the human race is just one of many in our universe locked in a dangerous struggle for survival.” (From Kevin Emerson’s website.)

This book is the first in a projected trilogy called Chronicle of the Dark Star. Science fiction fans will eat it up. I liked all the plot twists and turns, especially the final ambiguity about who the good guys and the bad guys really are. Liam and the rest of humanity seemingly have more than one enemy, and all of them are determined to thwart the plan for human survival in the universe. Maybe. It’s hard to figure it all out when you’re in the middle of a fight for your own personal survival, running from people who want to kill you, and doing all you can to catch up with some adults who can take responsibility for all the craziness that’s coming at you. All Liam can do, really, is follow his Mom’s advice:

. . . the reality is, when you make your own decisions, you never really know where they’ll lead, or what will come next. All you can do is make choices and move forward. And actually, what ends up happening is, the more you learn, the more you realize you still have to learn. . . . We’ll take it one unknown at a time.

I don’t know when the next book in the trilogy is coming out, probably next year. So, you may want to wait for all three books. I hate waiting for books in series. But this one was a good start.