*Answering the Cry for Freedom by Gretchen Woelfle

These brief biographies of 13 African Americans during the Revolutionary War demonstrate the power of self-determination as well as the power of faith.

*Answering the Cry for Freedom: Stories of African Americans and the American Revolution by Gretchen Woelfle, illustrated by R. Gregory Christie.  Calkins Creek, 2016, 201 pages, plus timelines, bibliography, notes and index 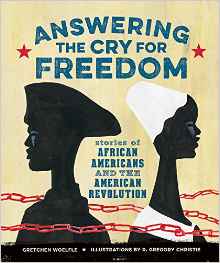 Almost half of them didn’t have birthdays because they were born in Africa or born to careless owners.  They all had skin that marked them out as slaves, even though a few were freeborn.  They all were alive during a time of revolution and lived to see its effects.  The subtitle may seem a bit misleading, for not all participated in the American War for Independence.  But they all, to some degree, participated in its central tent that all men (and women) are created equal, whether or not their equality was officially recognized.

I expected the usual ironic notice of white Americans fighting for freedom while keeping a significant portion of their population enslaved.  The word “enslaved” occurs frequently hut the point isn’t too heavy.  The author even touches on a fact not often mentioned–that Africans participated and profited from the slave trade as well as whites.  These are real people with ambitions and personalities, not merely victims.  The most striking aspect of this book is the importance of Christian faith for many of these individuals.  Boston King was a preacher whose first publication was a spiritual memoir.  Phillis Wheatley, captured in Africa, praised God’s grace in poetry.  Richard Allen, who bought his own freedom, was the founding minister of the African Methodist Episcopal (A.M.E.) Church.  Jerena Lee, an illiterate housemaid in New Jersey, answered a call to preach the gospel that took her to every corner of the United States and to every race and tribe, even Native Americans.  Some became Loyalists and fought for the British, eventually settling in Canada.  Some were freed, some died as slaves; some achieved material success, most didn’t.  All were flawed human beings, but they demonstrated the power of the human spirit, especially when fired by grace. The illustrations are block prints that speak with a simple eloquence.

Note: One of the biographies is of Sally Hemings, purported to be the long-term mistress of Thomas Jefferson.  There’s some controversy about that claim, but most historians accept it as fact.  This could be a caution.

Cautions: None (but see paragraph above)