Every Falling Star by Sungju Lee and Susan Elizabeth McClelland

Grit, friendship, and hope come together in this bittersweet memoir for teens. 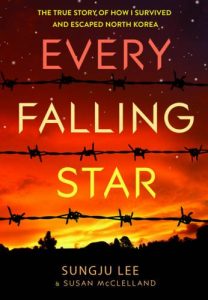 Every Falling Star: The True Story of How I Survived and Escaped North Korea by Sungju Lee and Susan Elizabeth McClelland. Abrams, 2016. 336 pages.

Recommended For: Teens, ages 12 and up

Sungju’s father was a well-respected leader in North Korea’s military. As a result, Sungju’s family lived in relative wealth and luxury in Pyongyang, a city in which public grounds were manicured, lights stayed on, grocery stores were full of food, and the schools turned out sharply dressed, academically gifted children. As with all dictatorships, however, when Sungju’s father fell out of favor, the family was abruptly shuttled off to a remote village where life operated very differently. The family eventually spent what money they’d saved and began to resort to desperate measures just to eat. Soon, Sungju understood why some of his classmates were willing to sell textbooks for food, foraged for edible mushrooms, or stole from the market. When his parents disappeared in their search for better conditions, Sungju banded together with some of his school friends (all in similar straits) in a desperate attempt to survive. Street life with gangs, violence, theft, sickness, death, and drugs dogged Sungju’s teen years. Suddenly, in a shocking turn of events, Sungju was reunited with someone from his past who helped him escape North Korea.

This is not a book for the faint of heart. It is, however, a compelling look at what life is like under regimes like North Korea’s. Readers will get a sense of the blind loyalty the citizens are indoctrinated with from the cradle. Sungju writes, “As a small child, I thought Kim Il-sung was a god.” Readers will also get a sense of the facade that regimes like this put on, both to their own citizens and the watching world. That pretty governmental facade hides stark living conditions and the hopelessness that rises from abject poverty. One of Sungju’s gang brothers, Young-bum, says, “Morality is a great song a person sings when he or she has never been hungry.” The facts of the matter are simply that most of many unsavory elements were, of necessity, part of Sungju’s struggle to simply survive. As Sungju spiraled further and further into the life of a street-wise gang member, he engaged in violence (sometimes in defense of his “territory” and sometimes just for spite), theft, drug use (often to mitigate his gnawing hunger), and finally to the lifestyle he’d spurned and resisted the longest: that of a pimp for the “night flowers.” He reasoned that such unsavory actions helped both him and the girls find money for food. In his mind, there were no other options.

Sungju mentions his spiritual hunger frequently. First, he prays to his mother’s ancestral gods. He years for some spiritual truth and ultimate hope. When he escapes North Korea at the end and is reunited with a family member, there is mention of the two attending a Presbyterian church. There are minimal details about this, perhaps to protect the identity of those who helped him, perhaps because he only stayed on the surface of Christianity. Still, he mentions at one point earlier in the narrative that he “didn’t understand Jesus then.” We can surmise that he comes to some further understanding of Jesus by the time he writes this memoir. Indeed, only the hope of the gospel offers the true hope that Sungju is constantly clinging to throughout his desperate young life. Sungju’s story is a rich one and one worth reading and discussing with teens.