Solid science fiction is delivered by an author who knows his stuff, though the materialist worldview is worth talking about. 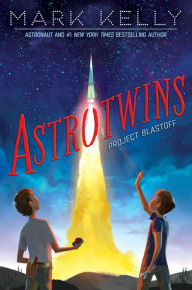 If the name Mark Kelly sounds familiar, it’s because he’s a former astronaut married to a former congresswoman (Gabrielle Gifford, D-AZ).  He casts himself and his twin brother Scott as the protagonists of this space adventure, which takes place in the early 1970s.  The twins’ specialty is sibling rivalry until their grandfather suggests they stop fighting and build something together.  With the help of brainy Jenny O’Mally and other neighborhood kids, they build a space capsule like John Glenn’s to orbit the earth.  Then the question is, will it work?  And the greater question: which twin gets to ride in it?

This is a serviceable little novel that will mainly appeal to science nerds.  The biggest problem with the narrative is information dump, when the story seems to forget it’s a story and creates another “learning minute.”  For example: Mark and Scott knew from school that 530-539 referred to numbers in the Dewey Decimal System . . .  The materialist worldview is a bit heavy-handed at times, as when a character thanks nature “for providing gravity.”  Otherwise, though, the story is inoffensive and often humorous, especially in the interplay between the brothers.  Lots of chemistry, physics, and astronomy go along for the ride, and readers who want to follow the twins to further space adventure can pick up the sequel, Project Rescue.

Cautions: Worldview (materialist—no mention of God but no obvious antipathy)