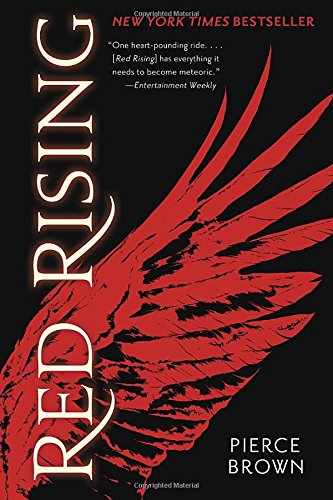 This review is brought to us by Ann Rees Berry, who has now finished an internship with Redeemed Reader.  Thank you, Ann!

Bottom Line: Darrow, a helldiver on Mars, learns a shocking secret about the world he lives in, and what must be done to make things right.

Darrow, alongside his fellow Reds, works in the mines below Mars’ surface, collecting the fuel necessary to make the planet habitable for the future generation. Although their lives are hard, the Reds are content, knowing that one day their children will be able to dwell on the planet’s surface. Darrow’s world is destroyed when he learns the shocking truth about the Reds and their condition. Fueled by personal loss and rage, Darrow becomes determined to seek justice for his people, no matter the cost.

Red Rising deals with many complex themes, such as class, politics, and warfare in a thought-provoking way. Darrow is a strong lead character, who grows and changes throughout the book without sacrificing his ideals. His cunning, determination, and compassion for others is inspiring. While Darrow’s not perfect, and does make mistakes, he tries to learn from them whenever he can. He refuses to become as harsh and callous as many of the people surrounding him, and tries not to let his rage define him. These qualities are what make him such a good leader, and an interesting character to follow. The side characters are also likable, and the villains are delightfully devious. While there is some romance in this book, it’s kept to a minimum and yet is well-developed and feels very natural.  The story ends, not exactly with a cliffhanger, but with the promise of more to come.

Red Rising is not for the faint of heart, due to some content. There are several violent scenes, and rape is alluded to a few times. However no sexual content is shown, aside from one mention of a married couple. There is some profanity, both of the real and fictional variety. These cautions should not stop mature teens, and particularly science fiction lovers, from reading and enjoying Red Rising.