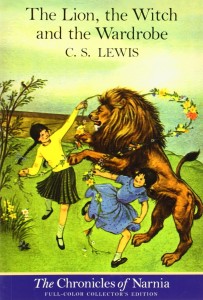 Some places we visit once as tourists. Once we have a souvenir, have checked off the “must see” locales, and perhaps eaten a signature food, we’re off to the next experience. Other places call us back, over and over, for return visits. A beach house every summer, a cabin in the mountains every fall, a grandparents’ farm on holidays. The collective memories we have from repeated visits to a beloved place shape our perceptions of other, similar locales. “This reminds me of….” or “These tomatoes are good, but not as good as the ones on the farm.”

Books are the same: some we read once and check off the list. Old Man and the Sea? Done. Moby Dick? Check. Some we revisit over and over. For me, that second group includes, among others, the land of Narnia. As I listened to the audio productions yet again with my children this summer, I realized that I have taken away some remarkable souvenirs from that magical land. They shape not only my evaluations of other literary works, particularly fantasy works, but also my understanding of my faith and the Bible itself. Here they are, in no particular order.

#1: Sometimes Fairy Stories May Say Best What’s to be Said

Amongst Lewis’s many excellent essays, he discusses the appropriate-ness of fairy tales for his purpose in imagining the spiritual truths he holds dear. A good summary of this essay can be found at Pilgrim in Narnia (there’s even a facsimile of the original essay). When traveling in Narnia, the reader fully believes in Aslan and in his work on behalf of those whom he loves. Whether he is traveling beside Shasta and Bree, silent and unnoticed, in The Horse and His Boy or waking the nyads and dryads in Prince Caspian, creating Narnia itself in The Magician’s Nephew or rising from the dead in The Lion, The Witch, and The Wardrobe, Aslan is eminently believable. Is is no small leap to think of our Lord in much the same terms: a constant presence even when we cannot see him, continually bringing forth praise from his creation, and rising from the dead. Spiritual truths often seem trite and cliche when couched in realistic fiction; suspending disbelief in a fantasy world frees the author to portray ideas without that worry.

#2: God is the God over mankind, over all of Creation, over the dark forces, and over worlds we can only imagine. 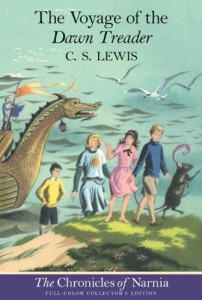 When Aslan roars, all submit–even the “bad guys.” He rules with a firm, just hand over the Sons of Adam and the Daughters of Eve, over all of created order in Narnia (even the seasons and the spirits of the trees), over the evil forces and their henchmen, and over worlds at which those in the books can only guess. Does he not guide those in his care? Did he not create the world of Narnia in the beginning? Does he not know magic from before the dawn of time of which the White Witch is ignorant? When those, like unbelieving Trumpkin see him for the first time, they cannot help but fall before Aslan in submission.

#3: Men and women are superior to the rest of creation; only men and women have been given the gift of dominion.

Have you ever wondered about the repeated emphasis on the Sons of Adam and the Daughters of Eve in the Narnia Chronicles? Only a Son of Adam or a Daughter of Eve can rule over Narnia. They are revered by the talking beasts and other Narnian creatures. Why? Because Aslan has put them in that position, not because Sons of Adam and Daughters of Eve are super special. In fact, at the end of Prince Caspian, Aslan reminds one that being a Son of Adam is worthy of high honor as well as deep shame. Just as the Lord put humans in dominion over the rest of Creation, just as we humans have the high honor of being made in God’s image whilst simultaneously bearing the deep shame of a sinful state. Each human is in the same position and called to the same dominion over Creation and the same stewardship of it; each human is both worthy of honor and in need of salvation we can’t earn.

#4: Magic is woven into the fabric of Creation; those who mess with it are up to no good.

In The Lion, the Witch, and the Wardrobe, the witch chides Aslan for being willing to “throw himself away” for the sake of a traitor. Aslan tells the Pevensie children later that the witch was ignorant of magic that existed from before the dawn of time. Consistently in the Narnia Chronicles, those up to no good try to usurp magic and attempt to circumvent the created order. And, consistently, Aslan sets things to right–not by using “magic” per se, but by restoring all to their proper place and function. Analogous to the law of God and the natural laws God imprinted in the very fabric of creation, Narnia reminds us that those using supernatural forces, unless they are the Lord himself, are up to no good.*

#5: Those who know Aslan have true hope; when the Lord of Creation returns, he will set things to right.

Chaos may reign. We may be prevented from returning to previous states of innocence like the Pevensie children eventually leave Narnia not to return (at least, in the same fashion). Some may die. Dire consequences occur. Evil doers may have us–and the world–under their thumbs as they wreak havoc on people and/or creation (like the prince in The Silver Chair). Yet, when Christ returns, he will set all to right. In The Lion, the Witch, and the Wardrobe, Lewis gives us a glimpse of this as Aslan reverses the winter caused by the witch. In Prince Caspian, he awakes the nyads and dryads. In The Last Battle, all is not lost; no, his followers simply cry, “Further up and further in!” as they joyfully follow Aslan into his own country.

*the subject of “magic” in stories is a contentious one among Christians. I am not

trying to answer the question of whether Christians should read Harry Potter or other books with “magic” in them so much as to point out that in the Narnia Chronicles, the only “magic” used is either Aslan’s (from “before the dawn of time”/interwoven into the fabric of creation) or an evildoer’s attempt to usurp Aslan. It seems to me that this is a good example of the right use of magic in a fairy story.

There are more–many more souvenirs one can take away from Narnia. What are your favorites? Which of the Chronicles has impacted you the most? Which is your favorite? (mine is The Horse and His Boy)