Bottom Line: In an engaging sci-fi thriller, one girl attempts to outrun her past while discovering her true identity. 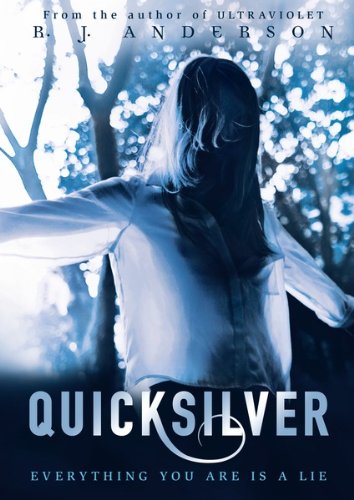 On June 7, the year I turned sixteen, I vanished without a trace.

On September 28 of the same year I came back, with a story so bizarre that only my parents would ever believe it . . .

Tori Beaugrand, the “other girl” in Ultraviolet, is the protagonist of its sequel, Quicksilver. Now with a new name, Nicola, Niki is trying to settle into her new life and be an ordinary teenager. But that is a vain hope, for not only is Niki extra-ordinary, she is extra-terrestrial, sent to earth as an infant for the purpose of scientific experimentation.
Until now, her parents have shielded her from any medical attention that would bring to light her genetic abnormalities, but DNA samples taken while she was missing have created a list of people who want to meet Niki. So, her parents take action and move to a new city, taking new names and covering their trail.

The only link remaining from Niki’s old life is the relay device —an extra-terrestrial transmitter that brought Niki to earth and which she is unable to destroy. Though it appears no longer active or dangerous, Sebastian, an acquaintance from Niki’s past, reappears to tell Niki that the transmitter can, and soon will, be used against her.

So begins a race against time, pitting Niki, Sebastian, and her new friend, Milo, against the “man” who first sent her to earth. Can Niki, with her prickly personality and engineering intelligence, truly keep her allies, or will the truth be too much, even for them?

As Niki tries to find her new identity —an identity linked to who she really is and not the girl she has pretended to be for most of her life — she also struggles to relate to her adoptive parents. Anderson is sympathetic to teenage angst, but by the end, Niki will realize there is more to most parents than meets the teenage eye.

Told in a first person narrative, with engineering terms instead of chapters, Quicksilver is a suspenseful sequel. Niki’s uncanny mathematical ability and love of engineering are evident through her narrative. “My new bedroom was half the size of the my old one —58.7 percent smaller, to be exact.”
Several themes of this YA novel make it unsuitable for a younger teen. Niki realizes she is asexual —even before her former boyfriend tried to force himself on her— and she talks to Milo bluntly about her lack of interest and struggles with it herself. Also, in one intense scene, Niki considers taking her life, but circumstances prevent her, and she realizes suicide is not the right decision. Though not an overtly Christian book, Milo’s grandmother shares a verse with Niki, Isaiah 41:10, that will haunt her through the rest of the book as she wrestles with its meaning. Milo, a Korean-Canadian, and Niki’s best friend, adds a great multi-cultural dimension.
Quicksilver is an engaging, sci-fi-esque adventure. Teen girls, particularly those with an inclination toward science and mathematics, should considering adding it, and Ultraviolet, to their summer reading lists. (Quicksilver can be read alone, but Ultraviolet sets the stage.)
Cautions: Sexuality (several sexual references, see above paragraph) Profanity (one time, possibly a prayer instead of an expletive)