In 2008, a middle-grade novel called Savvy swept numerous awards lists and was anointed with the silver medallion of Newbery runner-up. The first-time author, Ingrid Law, soon followed up with a well-received sequel (Scumble, 2010), and is certain to make a splash with Switch this September. Savvy has certain elements of a particular genre: a real-life location (rural Ohio), a loving though eccentric family, quirky characters, a desperate situation, and the intervention of magic due to the fact that each member of the family has a particular “savvy,” or supernatural power, that’s revealed at his or her 13th birthday.

Savvy is a fun read and I have nothing against it. I’m just wondering what it means that middle-grade 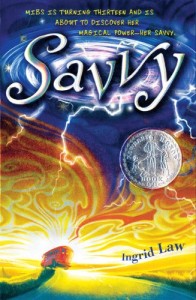 fiction (and YA for that matter) seems to rely more and more on supernatural elements that–barring modern-day mythology or legend adaptations like the Percy Jackson series–is usually described as “magic.” Magical realism, where supernatural events occur in our own world (as opposed to a mythical kingdom or alternate universe) has plenty of representatives in classic children’s fiction—think The Indian in the Cupboard, or Tuck Everlasting, or—even farther back—Mary Poppins. Magic is a staple of children’s literature, from fairy tales to Arabian nights, so what’s the problem?

Then there’s Almost Super. And Bliss and Cake. Also Flora & Ulysses, and Egg & Spoon. Sometimes the formula takes an interesting twist: the main characters in Almost Super receive “stupid” powers, and in Remarkable the main character is the only one who doesn’t possess some phenomenal gift. The magic almost always occurs without explanation; it’s just there, or it’s part of the family heritage from way back. Many of these books are enthusiastically reviewed.  A few are moody and sad, like Nightingale’s Nest, which had too many problematic elements to review here.   But most are wildly optimistic. Even though danger or sadness weaves into the plot, the reader knows that Gen will not die, that Felicity will find a home, that Mim’s dad (in Savvy) will recover. If not, the whole premise is a cheat. “Magic,” in this particular genre, could even be seen as a way to make the world come out right without resorting to any form of religious consolation.  Except that magic itself is a form of religious consolation.

Classic fairy tales like Cinderella perform a similar function, but fairy tales take place in a world understood as “other,” as Once upon a time. They are peopled by types rather than personalities: the wicked queen or stepmother, the noble prince, and the kind and beautiful heroine, with dwarves, giants, gnomes, and talking animals for magical mischief and comic relief. The generic nature of fairy tales insures their survival. They are for all time, not just today’s Issue of the Week. When highjacked and made to serve an agenda (as I wrote about here), they lose their staying power.

The uniformity of fairy tales (truth and beauty always win) tells us something about the moral compass and human yearning for clear distinctions between good and evil. I’m not sure what the increase in magical realism for middle-schoolers tells us, except perhaps that when God goes out the door, magic creeps down the chimney. We have our supernatural yearnings, and need our supernatural fix.

Fiction can’t preach truth, but it should reflect truth. We still love realistic children’s fiction of the past, like Betsy-Tacy and All-of-a-Kind-Family, because they reflected something of a “simpler” time. I don’t think that was because children’s publishing was more sanitized. I think life really was simpler (which doesn’t mean easy), because religious faith and moral codes were fairly standard. Now religious faith is supposed to be a matter of choice and no one’s faith is truer than another’s. In the secular public square and the public school, life can’t be seen as a gift, because gifts demand givers. Life is therefore more of a problem, or a series of problems, to be solved with facts and hard data. Imagination retreats into fantasy, offering hope that the world really is a fantastic place and there’s a little magic in all of us.

But where does the magic come from? That’s the basic problem of magical realism.  If we are not allowed to answer that question, those puffy hopes are nothing but clouds, apt to burn away in the sun’s hot glare.