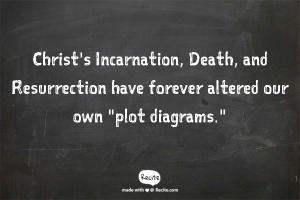 Emily wrote a marvelous series in the fall on the complications typicalhigh school reading lists might pose for Christians, sensitive students, or any young, impressionable reader. As a high school English teacher, I have taught many dark works; Shakespearean tragedies are a particular recurring element. Historically, I’ve often fumed: Why are tragedies like Macbeth, Romeo and Juliet, Julius Caesar, and Othello on my curriculum lists and not comedies such as Much Ado About Nothing or Twelfth Night?

My perspective has changed.

This fall, the Shakespearean tragedy on the docket for my tenth grade class was Othello: a dark, depressing look into the twisted heart of mankind if ever there was one. And yet, suddenly, this dark tragedy became a vehicle for frequent messages of gospel hope for me and my tenth graders.

In case it’s been a while since you’ve read Othello, let me remind you of its particulars: Othello, a Moor and general of the Venetian army, has married Desdemona in secret. He has also just promoted Cassio to second in command. Iago (third in command) is enraged at this and vows to seek revenge against Othello. A master manipulator, Iago works behind scenes to incubate jealousy, pride, revenge, and passion in the hearts of the unsuspecting Othello, Cassio, Roderigo, and even Desdemona and Emilia (Iago’s wife). This is a tragedy, and, as in all Shakespearean tragedies, nearly every main character dies. Othello serves as a good cautionary tale!

Thematically, with Othello, we discuss issues of pride, prejudice/racism, jealousy, passion, and revenge. In the past, I directed my classes to look at these thematic issues in light of Scripture, studiously comparing the worldview of the play to a biblical worldview. This past semester, however, our discussions took a different turn, a turn for the better.

I had a very lively, frank group of students, all of whom had been studying the Old Testament in their Bible class. They also each had an iPad. We were discussing an iPad app I’d recommended to aid them as we read through Othello, and I remarked that the app came with lots of cautions: drunkenness, sex, violence, etc. Pretend shock registered on a student’s face as he then protested, “We shouldn’t be reading this play!” I know this look; it’s the Christian school student’s thinly masked way of trying to get out of reading the “heavy” stuff.

As I’m thinking how to phrase my usual response about sin, the Fall, and redemption, suddenly I thought of Genesis. And that my students had just finished studying it. And that there are extremely similar “cautions.” So I asked them, “Can you think of a book of the Bible that might have these same cautions?” A little more hinting, and suddenly a student blurted out, “Genesis!”

Twenty minutes later, we’d come up with a thorough list of the offensive actions God’s people had committed or participated in throughout the book of Genesis: lying, betrayal, envy, murder, drunkenness, sexual immorality, and many others. I closed our discussion with the reminder that these were messed up people who desperately needed a redeemer, a redeemer promised back in the garden. Furthermore, God didn’t wait until they got their lives in order; no, he used them in their messed up state. No one is too messed up for God’s redemptive acts.

Othello and the Cross

Fast forward a week, and my students and I were in the midst of Act III. For you non-English-literature types, Act III is frequently the “point of no return” in a Shakespearean tragedy. Brutus betrays Caesar, Macbeth is consumed with ambition, and Iago has gotten Othello worked up into a jealous rage. It’s the peak of the classic plot diagram, and henceforth, the play’s plot is all “falling action” until the final tragic ending. (Remember, during the Renaissance, playwrights like Shakespeare were taking inspiration from classic Greek drama.)

My students and I discussed Act III, scene iii: Iago has skillfully lit the sparks of doubt and jealousy and fanned them carefully. Othello’s rage is now burning out of control, setting further events in motion in snowball effect: each little action adds momentum to the tragic hero’s submission to his tragic flaw. The ending is assured. I had been reminding my students all along that we read to see how Shakespeare accomplishes this classic arc, not to see whether or not the ending is sad. We know from the get-go that the title character is destined to die due to his tragic flaw, and he will take people down with him.

And yet, this year—for the first time in teaching Shakespearean tragedies—I realized that this classic plot diagram is not true for the people of God. There is no “point of no return.” No person is ever too far gone for God’s grace to work. We might pass a point in life where it gets more challenging to hear the gospel, where our habits are harder to change, where other Christians have written us off. But no one is too far gone. And so, my students and I discussed the thief on the cross next to Christ: even at the end of his life, in his last breath, there was still time for the grace of God to intervene.

Not only are we never too far gone for grace to intervene, but when we are in Christ, we are new creations. 2 Corinthians 5:17 reminds us that “the old has gone, the new is here!” (ESV). My Christian school tenth graders had never heard that verse before. What a message of hope! Life might not be perfect all of a sudden, and our old habits and sinful ways are still pulling at us, but submission to them is no longer inevitable.

We coined a new saying as we watched Othello and Iago and the rest march toward their doom, spreading rumors, slandering one another, giving into the “green-eyed monster” (the actual phrase Shakespeare used!), and acting on their insecurities (all such typical high school experiences):

Be biblical, not typical.

We still read Shakespeare hundreds of years later because he is still relevant: the thematic issues of pride, prejudice, jealousy, racism, and passion were all present in our Christian high school, and they have been present since the garden. Like the people of God in Genesis, we are imperfect people and still need a redeemer, and, in Christ, we have one. Our lives do not need to follow the typical plot arc into tragedy. We are never past the point of no return.

Othello might not be typical Easter reading in your household, but do take the time as we celebrate the resurrection of Christ to ask your children and students where we see the need for redemption in literature and how Christ’s incarnation, death, and resurrection have forever altered our own “plot diagrams.”