The Four Loves by C. S. Lewis: an Introduction 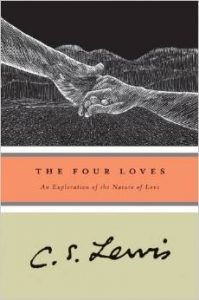 This thing called “love”—what is it? Something we long for, feel vague stirrings about, idolize, draw inspiration from, and abuse left and right. It’s unpredictable, stunning, fragile, overwhelming. And more misunderstood and lied-about than any other human emotion. No human has a comprehensive grasp of love, but if you’re looking for some thought-provoking handles, The Four Loves might be a good place to start.

Some of Lewis’s nonfiction studies are easier to read than others; this is not one of the easy ones. After forty years of Lewisophilia, I only recently got through all 141 pages of it. His unique approach to subjects is what draws enthusiastic readers, but he can be too unique, i.e., obscure, for the average citizen of the early 21st century. And what would an untidy, slightly eccentric, not-especially-attractive Cambridge don who didn’t marry until the age of 58, whose relationship with his father was difficult to say the least and whose long-term friendship with a dead army buddy’s mother is still a matter of controversy—what could such a figure have to say about love?

Not what the reader might expect, and this is partly why it’s not an easy book to get into. But a reasonably literate high school or college student could glean insights that would stand them in good stead for future relationships.

Beginning with the simple but huge statement “God is love,” Lewis sets forth his original plan to examine what he calls “need-love” (such as that of a child for his parents) and “gift-love” (such as God’s love for his creatures). But Need and Gift turned out to be more layered and complex than he’d originally thought, and further thought seemed to uncover four basic loves: Affection, Friendship, Romantic attraction (Eros), and Charity. Of the first three, all have a valid place in human relationships and all have their dark sides. Only charity, which most resembles God’s love for us, is free from deceits and pitfalls.

Before getting to those chapters, the reader should first understand an important distinction, which Lewis calls “Nearness of likeness” and “Nearness of approach.” Careless speakers, when they say God is love, could just as easily mean Love is god. This is a serious mistake, leading to much misery in the world. “Like” does not equal “same,” just as the “image of God” does not equal God. We may give our human loves the unconditional allegiance which we owe only to God. Then they become gods: then they become demons. Then they will destroy us, and also destroy themselves. (We will see in subsequent chapters how affection, friendship, and Eros can do precisely that.) But “nearness of approach” includes all three human loves in the great embracing arms of Charity, where they keep their proper place and perspective.

In the next chapter, “Likings and Love for the Sub-Human,” Lewis addresses another distinction, that between “Pleasures of Need” and “Pleasures of Appreciation.” The first is like a drink of cold water to a parched throat—intense while it lasts, but after the need is satisfied we don’t sit around dreaming of cold water. Pleasures of appreciation are those we come across unexpectedly, like the scent of honeysuckle or a fine wine served at a wedding reception. The first satisfies our need; the second satisfies itself, and seems to point beyond us. All four loves will have their inherent pleasures of need and appreciation.
Of the three chapters that follow, Friendship is the longest and the most difficult for me to follow. It appears to have been the “love” most important to Lewis, at least until he became a Christian and for a long time afterward. By his definition, friendship is a very rare thing. Most of whom we call friends are more like affectionate acquaintances.

The chapter on Eros, most appropriate for Valentine’s Day, is not about sex primarily, but about romantic love. True Eros begins in the mind, not the sex organs; it wants the person, not the act. Its desire for complete union with its object obliterates the distinction between giving and receiving—thus a man and his wife in loving relationship become “one flesh.” The great danger in Eros is “falling in love with love.” Once the wedding vows are spoken and a couple sets up housekeeping, the sheer pileup of everyday mundane details, with discarded underwear on the bathroom floor, toilet seats left up and flossing in each others’ presence (I’m embellishing here!) tends to dampen romantic ardor and disillusion the partner who expects the thrills to continue. Date nights won’t help if the object is to rekindle the ardor of early days. The purpose of Eros is to get men and women together; something else will keep them together, and that is Charity.

Even long-term, faithful married love is only a shadow of what we might call the Real Thing:

We were made for God. Only by being in some respect like Him, only by being a manifestation of His beauty, loving-kindness, wisdom or goodness, has any earthly Beloved excited our love. It is not that we have loved them too much, but that we did not quite understand what we were loving. It is not that we shall be asked to turn from them, so dearly familiar, to a Stranger. When we see the face of God we shall know that we have always known it.

There are worse ways to spend a Valentines-Day weekend (or the V-Day pre-weekend) than to curl up with The Four Loves.