Before I started writing The Middle of Somewhere, I did some research.  Every novelist has to do some research, especially if she’s writing historical fiction (three of my published novels are historical fiction).  An author has to have a sense of the lay of the land before she can determine which direction to go.  And lots of authors love research.  Unfortunately, I don’t.  It can be a thrill, especially when discovering that little-known nugget of information that will provide a key event in the story—but mostly it’s a slog through tons of information you’re going to need to remember but you forgot to bring a pencil and paper along so you tear a strip of margin off that flier you picked up at the farmer’s market and scribble a note and stick it in the book and hope you remember where it is.  (I’m not too organized at note-taking.)

But for The Middle of Somewhere, the research was fun!  I went on my first-ever camping trip, all by myself!  I checked a Kansas tour guide for interesting attractions, marked up a map, calculated mileage, and hit the road.  And this time I didn’t forget the notebook, so when ideas and impressions came to me I pulled over and wrote them down.  I was able to use almost all of them, which leads me to the third and final key of excellent writing: 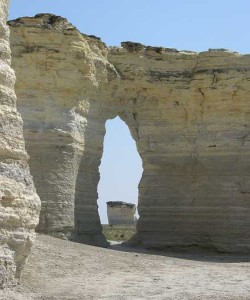 Chalk Pyramids, otherwise known as Monument Rock–truly in the middle of NOwhere!

Sometimes when I give talks, I read a particular portion of the book and ask the audience to provide sound effects.  It’s the scene in Chapter 7 where Pop decides he needs a break from kids, so he kicks Ronnie and her brother out of the RV for a night.  They end up sleeping in a tent, and if you’ve read that far you know it was not a restful night.  You might not have noticed the sounds I wrote about, but if you could participate in one of my talks when I read this chapter you’d see how much atmosphere they add to the scene.  Where did all those sounds come from? 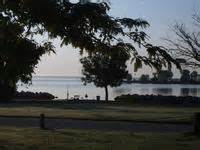 Cheney Lake as it looked when I settled in for a peaceful night. Little did I know . . .

On my very first night in a tent, I was the only camper at the Cheney Lake (no relation) campground.  Sometime after dark the wind kicked up, exactly as described in the book, and I started thinking about how maybe it wasn’t too smart to be out on the Kansas plains by myself in a flimsy tent during the tail end of tornado season.  Obviously I didn’t get blown away, but when morning finally came I got out my notebook and wrote down all the sounds I could remember: sighing wind, moaning wind, the ping! ping! of raindrops on nylon, even the huh-huh-huh sound of the zipper pull.  But not the creature snuffling around the tent—that didn’t really happen.  All those sounds were added to make the scene believable.

Any writing teacher will tell you to use lots of details; that’s a basic rule.  But you don’t just chuck them in.  Have you ever made chocolate chip cookies?  When do you add the chocolate chips—before you drop the dough on cookie sheets, or after?  Most of us would stir in the chocolate chips while the dough is still in the bowl, rather than sticking them on each individual ball of dough after they’re on the cookie sheet.  Details in a story are like that: you don’t just stick them in wherever there’s a place, or try to use up every one you thought of.  Details should serve a purpose in the story. 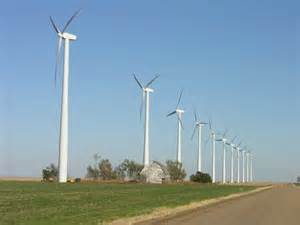 The Grey County Wind Farm, where I met “Howard”

Take another look at that bullet-point list above.  I used the one about the disappearing highway during a part in the story when Ronnie is looking for her brother, who has also disappeared.  The phenomenon echoes her bleak, anxious feelings.  Mr. Liggett’s road sculptures form an echo to Gee’s hyperactivity.  The detail about the northward-bending trees communicate a sense to Ronnie of other-worldness, of getting out of her normal life into a new existence, which is exactly what she wanted to do.  Often, details serve no purpose other than to sharpen the scene and give the reader a sense of place, of “being there.”  And that’s reason enough.

How’s it coming on your story?  (Remember our contest with the great prizes?) Before I wave farewell and drive off into the sunset, here’s what you need to remember:

Now that our road trip is over, are you ready to roll on your own?  Remember you have until July 20, which seems a long way off, but it’ll be here before you know it!

Are you just joining us?  Here’s Betsy’s review of The Middle of Somewhere.  And if you’d like to participate in our “Around the World in Sixty Days” summer reading challenge, here’s the overview, the master reading list, and the first post for our first challenge book.  Don’t forget our adult/teen reading challenge–there’s still time to enter the contest to win free books!