*Tops and Bottoms written and illustrated by Janet Stevens 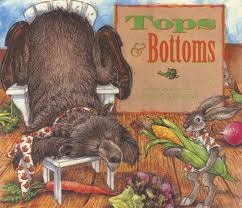 He who has a slack hand becomes poor, but the hand of the diligent makes rich. He who gathers in summer is a wise son; he who sleeps in harvest is a son who causes shame.  (Proverbs 10:4-5)

Bear has plenty of land, but he’s lazy and doesn’t want to farm it. Rabbit has a hungry family, and he’s willing to work. So they drive a bargain: Rabbit will do all the work on Bear’s farm while Bear sleeps, and at the end of the season they will evenly split the crops. They agree that Bear will have the tops and Rabbit the bottoms of the harvest. The first year, Rabbit plants root vegetables and gives Bear the less desirable leaves while he takes the valuable produce. How many times can he outsmart Bear before Bear learns a lesson?