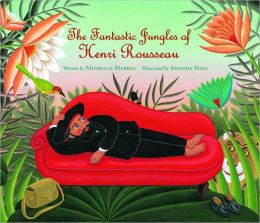 “Henri Rousseau wants to be an artist.  Not a single person has ever told him he is talented.  He’s a toll collector.  He’s forty years old.”  A more unlikely subject for exhibit fodder could hardly be imagined, “But he buys some canvas, paint, and brushes, and starts painting anyway.”  God’s creation calls him to paint—“when he strolls through the parks of Paris, it’s like the flowers open their hearts, the trees spread their arms, and the sun is a blushing ruby, all for him.”  He is led by intense sympathy and feeling when he paints; “sometimes so surprised he has to open the window and let in some air.”  Evocative scenes, mostly jungles and deserts–places he’s never actually seen–dress his canvases.

For twenty years, Henri submits his work to various exhibits, but the art establishment turns up its collective nose at him.  He is undeterred, and eventually a new generation of artists begins to appreciate his verve and exuberance—which is why his work appears in museums throughout the world today.  The writer writes, with verve and exuberance, of “garlands, rockets and rosettes of color.”  The illustrator adopts Rousseau’s characteristic “naïve” (as in childlike) style to picture this story, including clever references to the artist’s own paintings and celebrities of his day such as Picasso, Robert Delaunay, and Gertrude Stein.  The expressionist style also gets a nod with symbolic touches: Rousseau floating in new knowledge, merging with the riotous colors of the botanical garden, shrinking before the mighty art critics of his day.  The vindication of an ordinary man who had to paint is an ageless story that will make you cheer—and go online to look up more work by Henri Rousseau. 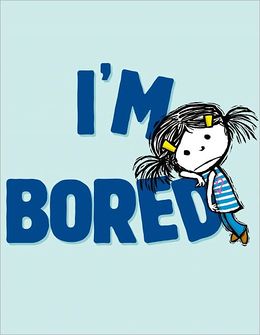 Has this ever happened to you?  “I’m bored!” says the kid.  “Why don’t you play that new game Grandma gave you for your birthday?”  “Boring!”  “How about drawing a picture?”  “Borrrring!”  “What about–”  “BORING!”  Next time it happens, throw the book at ‘em.  This book, that is.  A typical six-year-old has the tables turned when she meets a potato even more bored than she is.  That’s because the potato has its mealy heart set on one thing and will not be deterred, even when the little girl throws herself into selling kidhood as a wonderland of creativity.  Finally she gives up: “How can you possibly think that kids are boring when we can do all this cool stuff and think all these amazing thoughts and be anything we want to be?”  The potato is unconvinced, but hopefully kids will think twice about their untapped resources.  It’s funny and ironic, in a friendly way.  Especially when the potato gets a taste of its own medicine.

House Held Up by Trees, by Ted Kooser, illustrated by John Klassen. 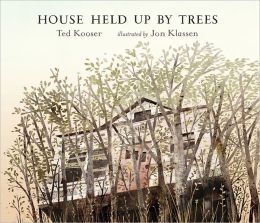 “Not far from here, I have seen a house held up by the hands of trees.  This is its story.”  The builder of the house, as imagined by (former poet laureate) Kooser, had something against trees.  The house stood on a bare, flat patch of ground.  The trees—elm, ash, hackberry and cottonwood–“all noisy with wind and birdsong,” stood on either side, and that’s where the children loved to play.  While they grow up, their father is obsessed with his (artificially seeded) lawn, always cutting to an even length, relentlessly pulling up the seedlings that take root from whirling maple and elm seeds.  The lawn gives him no pleasure when the children are grown and gone, so he puts the house up for sale and moves to an apartment in town.  But the house seems so inhospitable that nobody wants it.  In time, with no one to pull them up, the seeds sprout along the foundation, saplings scratch the old paint, new growth forces its way through the rotting floor.  “The winds pushed at the house but the young trees kept it from falling apart, and as they grew bigger and stronger, they held it together as if it were a bird’s nest in the fingers of their branches.”

Nature wins, only because the man should have cooperated with her in the first place.  There needn’t be a war—I think that’s the point.  The text is gently poetic and the illustrations are lovely, with the Klassen trademark speckled-block-print style.  The story won’t appeal to every kid, but it’s quirky enough to be worth a look. 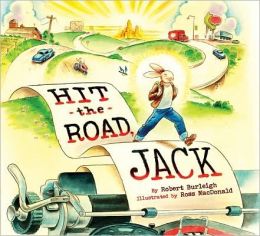 Hey, Jack!  Skedaddle! Gotta Hop!/ Vamoose! Take off and go!/ Nose is itching, ears are twitching,/ Come on! Get with the flow!  Time to see the road unwind/ And feel the wind blow free./ Hello, America! Here I come/ From sea to shining sea!

From his Manhattan apartment overlooking busy streets where suited and hatted gentlemen stroll with poof-skirt ladies, our hero catches the scent of wanderlust.  Jack Kerouac?  No, Jack Rabbit, though the bunny-world he inhabits breathes the same fifties ambiance as that of the author of On the Road.  Hit the Road is an homage to that Beat-Generation classic, with a pastel tint.  Jack begins at the Greyhound station, and “Truck it, train it, bike it, hike it,” he won’t stop until he’s crossed this great land.  As the pages turn we watch the scenery change from wooded hills to grassy plains to sunset-colored deserts, ending finally at the Golden Gate.  Everybody’s happy in Jack’s world: strangers aren’t strange, feet don’t hurt, nobody turns you away.  The meter strains itself at times: “The road, the road, the road, the road—you’ve got hit it, Jack!”  But a more cheerful paean to the unwinding road could hardly be imagined.  Watch out, though—the travel bug could bite.

Brothers at Bat: the True Story of an Amazing All-Brother Baseball Team, by Audrey Vernick, Illustrated by 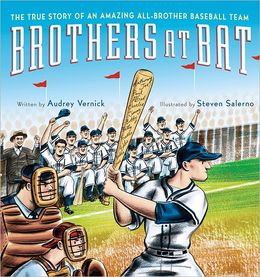 According to the National Baseball Hall of Fame, twenty-nine all-brother teams have played baseball since the game was invented, but the Acerras outplayed them all.  If baseball had been around in ca-3500 B.C., Jacob could have fielded a such a team—like him, Mr. and Mrs. Acerra produced twelve sons (and four daughters) all of whom loved the game and were good at it.  From the late 1920s through the following decade, the door of their family house in New Jersey slapped continuously every spring from kids running out to play.  Coached by their dad, the brothers formed their first semi-pro team in the mid-thirties and played continuously, cycling younger brothers on as the older ones retired, until 1952.  The only interruption was World War II, during which six of the boys signed up to serve in far-flung theaters of war, and all of them came home: “Mrs. Acerra cried every time another boy walked in through the door.”

They married, had kids, became pillars of their communities, played ball.  Never a fallout, never a split; friends for life.  In 1997, the seven remaining brothers, along with dozens of children and grandchildren, chartered a bus to travel to the Baseball Hall of Fame in Coopersburg, New York, for special ceremonies honoring their contributions to the game.  On their way home, the bus broke down, but instead of griping about it, somebody found a bat and ball, and . . .  The final two-page spread shows the Acerras, young and old, past and present, playing baseball, the little white ball binding their saga together.  I love this book: a salute not just to the game, but to the joys of family connectedness.

If you’re looking for older-boy-type picture books, check out Cowboys and Pirates, by David Harrison (poetry added!).  Girls will like some of these picture books about creativity, and what kid doesn’t like animals?? Have you ever wondered What Animals Really Like?