Hobbit Read Along, Week 5: The One True Myth

Can you believe it?!  It’s the last week of our read along, and less than two weeks until The Hobbit hits the big screen!  So, to those of you who’ve made it this far, this is your pat on the back.  And guess what?  I have one more hobbit caricature to give away, so tell me how you liked the read along in the comments below–some feedback about what you liked or what could have been tweaked, how your kids liked the story, what you’d like to read next, etc.  You’ll be entered to win! 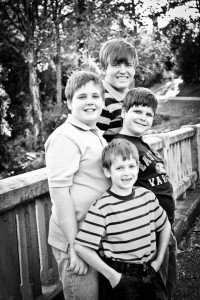 Congratulations to The Evert Boys for winning the radio theater contest!  They’ve earned themselves a Hank the Cowdog book, as well as a Hobbit caricature of a family member or friend.  I am so thrilled that so many of you got to hear their recordings…we had over 130 people vote since Thursday!  I hope you guys are as excited as I am to try another contest like this before too long.  Who knows what radio or writing careers we can launch by whetting the appetites of young readers!

In addition, since we’re in the Christmas spirit today, I’m going to give Taia and Micah both a caricature each, too.  You all did such a great job, and I hope you feel encouraged to read and make your own audiobooks to treasure for years to come!

God in The Hobbit

Over the last few weeks, we’ve given a lot of attention to Jim Ware, author of Finding God in the Hobbit.  We’ve spoken with him about finding God both in the villains and the heroes of Tolkien’s writing.  And I’ve complemented his family-focused writing with some more in-depth study of the topics.

Today, however, we’ll wrap up the read along guides with one last big idea: the One True Myth.  Amazingly enough, after I had sketched out my plans to write this post, I came across an article entitled The God of Men–And of Elves: How C.S. Lewis Became A Christian by Martin Cothrin at The Imaginative Conservative which pulled together most of what I wanted to detail.  So I thought I’d encourage you to read his article when you have more time.

For now, though, I’ve tried to make my last installment a little more personal, and focus on how Tolkien’s idea (and behind his, G.K. Chesterton’s idea) of the One True Myth impacted my life.  One reason it’s such a big deal is that it was one of the last whispers of the Holy Spirit before He brought me to spiritual life.   And remarkably, I didn’t find out until years later, it was one of the last arguments He used to bring C.S. Lewis into the light as well.

Imagine the scene: a blustery winter evening, with Lewis, Tolkien and another friend out for a walk among the grounds of Oxford.  Lewis has at this point been moved from atheism to theism, but he is not yet a Christian.  He cannot see the importance of the life and death of a man nearly 2,000 years before.  Certainly, Jesus’ life seems inspiring.  But a savior?  The Biblical accounts are just stories, after all.  Just myths like any other–like Greek and Roman myths, or Beowulf, or his beloved Norse mythology.  How could a rational man, a man living in the Scientific age, actually find anything unique in the stories of Christ?

As Martin Cothran puts it in his Imaginative Conservative article, “Lewis believed these stories he admittedly loved to be lies, he told Tolkien, albeit beautiful lies—’lies and therefore worthless,’ he said, ‘even though breathed through silver.'”

But Tolkien, the dog-eared Catholic, pushes him on the point.   The conversation twists and turns, and they return to the confines of a drawing room.  The scientific mind of that era–and of ours as well–tells us that because every culture has its mythology, and because all these mythologies are conflicting, we must be grasping at nothing.  We must be making gods in our own image, when there is no God in reality. 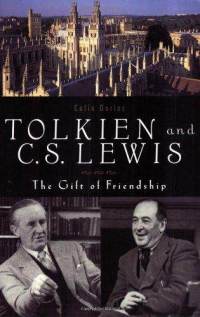 “But how do you know that, Lewis?” Tolkien prods.  “What if the Christian stories–the gospel accounts of Christ’s death and resurrection–are both true and myth?  And what if the very existence of all the counterfeits doesn’t prove there is no God, but rather points us to the existence of the genuine article.”

Of  course, I’ve put words in Tolkien’s mouth here, but if we want to know how he might have said it, we do have the meat of his argument in his essay, On Fairy Stories.  The general idea is that yes, the word of God is told in a story form, just like all the great mythologies of the world.  But unlike them, it is historically true, and thus the gospel story as His Story is the highest story, the genuine article, to which every other story points:

The Christian joy, the Gloria, is of the same kind; but it is preeminently… high and joyous. But this story is supreme; and it is true. Art has been verified. God is the Lord, of angels, and of men—and of elves. Legend and History have met and fused.

Martin Cothran sums it up brilliantly:  “The answer…is to see that Christianity is the fulfillment both of man’s intellectual and imaginative quests. The apostle John says in his Gospel that Jesus was the logos, a reference to the underlying principle of the cosmos which philosophers had been seeking since before Socrates. Lewis would realize this as well. But it was Tolkien who made him realize that, in addition to Christ’s fulfilling man’s search for the True, He was also the fulfillment of man’s search for the Beautiful—and that, in fact, they culminate in the same thing.”

In my own journey, I came at this idea from the other side.  According to the postmodern mind, all these conflicting mythologies are not false, but true.  Because it’s only the grasping toward God that matters, not whether our myths about Him are True in any historical or ultimate sense.  But Lewis, forwarding Tolkien’s idea in The Pilgrim’s Regress, suggested to me that all the stories I loved from my childhood and college years, Anne of Green Gables and Anne Frank’s diary and Wallace Stevens and Charles Dickens and all the rest, were actually not pointing away from Christianity, but toward it.  Toward Christ and His death and resurrection. 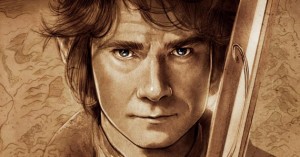 Here’s how Lewis put it, the very words that crashed into my heart:

Child, if you will, it is mythology…but then it is My mythology.  The words of [pagan] Wisdom are also myth and metaphor: but since they don’t know themselves for what they are, in them the hidden myth is master, where it should be servant: and it is but man’s inventing.  But this is My inventing, this is the veil under which I have chosen to appear even from the first until now.  For this end I made your senses and for this end your imagination, that you might see My face and live.  What would you have?  Have you not heard among the Pagans the story of Semele?  Or was there any age in any land when men did not know that corn and wine were the blood and body of a dying and yet living God?

As you finish reading The Hobbit over the next weeks, and as you finally sit in front of the big screen, heart-pounding and fists grasping the chair, to enjoy Peter Jackson’s fantastic interpretation, remember this idea.  Remember that what you feel–all the excitement, the anxiety, the exhilaration and especially (if that last installment makes it on screen) that sudden joy at Tolkien’s “eucatastrophe”–is actually pointing you to something else.  Just as I learned from Lewis, and Lewis from Tolkien, and Tolkien from Chesterton, on ad finitum…all the great stories of the world are intended to point you to the real adventure God is unveiling in our lives and throughout all of history.  His glory revealed through Christ’s redemption of His people.  The One True Myth.

One of the most wonderful implications of this idea is that stories really do have a place in God’s economy.  He uses them to nourish us, encourage us, convict and even change us.  And most of all, He uses them to point to Himself and what He has done.  For that reason, I am still hoping to rope in Andrew Peterson in the next few days on how Tolkien has influenced his writing.  But, of course, the influence of Tolkien is so huge in our literary landscape today.  Colin Durien, a Christian scholar who is releasing a biography on Tolkien next month, actually argues that Harry Potter couldn’t have come about with Tolkien’s work exploding fantasy into the publishing scene.  (Did you know Tolkien’s publisher actually expected to lose money on The Hobbit?  Durien says he only published it because he liked Tolkien so much.)

So, watch for one last post with that interview–and pray that we’ll be able to work it into Andrew’s busy touring schedule right now–as well as books that we recommend as a follow up to The Hobbit.  And finally, I’d just like to say thank you to each of you who made it this far.  It’s been so fun to prepare this for you each week!  And I hope very much we can do it again soon!

In the meantime, do you have any suggestions for families looking for that next read aloud book?

For more reading on our site, you can check out some of our Christmas suggestions in Janie’s Advent post, or read more of journey through books to God in my series Behind the Bookcase.  Or check out my review of True Grit, a story that I think clearly spells out the gospel in a very moving, but veiled, way.  And definitely come back in the next few weeks for more great gift ideas for the young people in your life!   You can sign up to our biweekly newsletter (on the sidebar) and like our Facebook page to keep up with what we’re up to next.