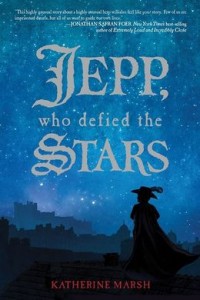 Jepp’s diminutive size has always been a source of amusement and comment for the travelers who frequent his mother’s tavern in Astraveld, Holland, but she loves him and defends his dignity.  So it’s a bit of a mystery why she accedes to the courtly Don Diego, who appears in Jepp’s sixteenth year and promises a better future for the boy: a position in the court of the Infanta Isabella, ruler of the Spanish Netherlands.  Lured by the promise of opportunity and education, Jepp kisses his mother goodbye and embarks on a bouncy coach ride to Brussels.

His introduction to court life is not auspicious—there’s hardly time to get his bearings before he’s poked into a giant pie, from which he is expected to leap out for the amusement of the Infanta and her couriers.  Now that he’s out in the world, his defining struggle reveals itself: “I am not a curiosity or a clown.  I am a boy with an agile mind and aspirations to use it.  We are nothing if not our hopes and dreams.”  But worse than his own exploitation is the fate that befalls Lia, a winsome midget.  Jepp’s attempts first to defend and then to avenge her land him in big trouble, leading to a sudden transfer to a tiny island off the coast of Denmark, where the noted astronomer (and noted eccentric) Tycho Brahe is making celestial observations that will cut a path for Kepler and Newton to follow.

As Jepp morphs from entertainer to scholar the story’s main theme comes into focus: does destiny or volition control our lives?  Are we ruled by fate or free will?  The unchanging pattern of the stars becomes a canvas for Jepp to measure the things that can’t be changed about himself: his size, his mysterious parentage.  It’s almost too much for him, until he discovers the thing that matters most, and reaches out to take hold of his own destiny.  “[O]ne of the graces of this world is that there is always some opportunity to show through our actions—be they ever so small or humble—who we are and what we truly believe.”

Jepp succeeds as an adventure, a love story, and a historical novel with a resonant theme.  One of the best things about it is the respect paid to historical consciousness, especially in regard to religion.  Both Jepp and Brahe are believers in their own way.  “May the Lord bless our endeavors,” the astronomer prays, “so we may do this work, revealing to mankind the artfulness of His creation.”  In an afterword the author traces her interest in astronomy to her mother’s obsession with astrology.  In Jepp’s time the two had not yet separated; one income source for Brahe and his little college of scholars is drawing up star charts for prominent figures of Europe.  The references to horoscopes and celestial influence form part of the book’s integrity: character, setting, and theme come together to form a convincing whole.  This is rare in adult fiction, still rarer in young adult. 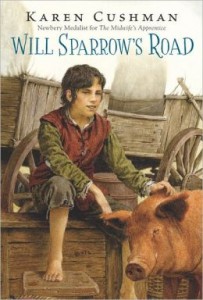 Ever since Catherine, Called Birdy (1995), Karen Cushman’s earthy, humorous novels depict young ladies of 13 or so, ill-at-ease with their circumstances, setting out under inauspicious circumstances to find a place for themselves.  Will Sparrow is her first male protagonist, and I like her reasoning: “When I decided to write a book about a child in Elizabethan England who runs away and joins a troupe of ‘oddities and prodigies’ traveling from fair to fair, I knew the child had to be a boy.  In the often brutal sixteen century, a girl on the road would not have long survived.  And I did not believe a girl could successfully disguise herself as a boy in a world with so little privacy.”  Too right–these basic facts of nature have oft eluded other authors who, in their quest for female ascendancy, portray girls passing for soldiers or sailors or Elizabethan actors.  Cushman’s resistance to that cultural currant is commendable, as is her close attention to detail and language—even though most of her female protagonists display flashes of proto-feminist feistiness.

Which doesn’t mean that Will Sparrow isn’t feisty, in inverse proportion to his small size.  The story begins when he runs away from his sorry excuse for a master: an innkeeper who supposedly traded him for beer.  The beer went to Will’s own father; we don’t see that transaction but pick up at the moment the boy hits the proverbial road.  In his odyssey from late-summer to rainy autumn he meets charlatans, cutpurses, and down-and-outers, among which he feels right at home: he’s a thief and a liar after all.  In search of a regular sustenance he ties himself loosely to a traveling show that features a pugnacious dwarf, a three-legged chicken, a pickled mermaid and an unusually hairy girl who’s billed as some kind of cat-lady.  Will is prepared, along with the show’s owner, to take whatever advantage he can of these oddities.  But of course, things are not as they seem.

The plot meanders through its landscape, with the greatest interest residing setting, details, and characters.  Both dialogue and narrative (third person, though entirely from Will’s point of view) is studded with words like “mayhap” and “certes,” which will intrigue some readers and put off others.  Her characters speak of God, e.g.: “If only they [the dwarf and cat-girl] might accept that they are part of God’s plan.”  None seem truly devout.  Lip-service believers are common in every age, but I would like to see some real believers in the story.  The heart of Will’s journey is discovering the goodness in himself.

For more traveling oddities, see our review of The Charlatan’s Boy.  For more thoughts on historical fiction, go here.  Or see our top YA picks from last year.