Brother-Sister duos are a staple in children’s publishing ever since the Bobbsey Twins—a way of stretching the appeal, I suppose.  These new series try to do a little something extra: explore the past, introduce literary classics, or indulge in the joys of wordplay. 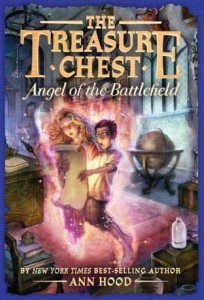 Maisie and Felix Robbins are twins who have had their world turned upside-down.  Dad, an art curator, is moving to Dubai to manage a museum.  Mom is moving to the family estate in Newport, Rhode Island, to start a law career.  Divorce is in the works, and the twins are desolate, not only because their family has dissolved but also because they have to say good-bye to their New York apartment in order to live in a tourist attraction.  Elm Medona, a millionaire’s estate, was built by their mother’s great-grandfather, but since the nice parts are now open for tours, their new living space is in the sweltering servants’ quarters.  The old house can at least yield a few hours of diversion, and while touring they discover a secret room called the Treasure Chest, containing an eclectic trove of artifacts.  Halfway through the book, they finally discover that some of these apparently have the ability to transfer Maisie and Felix to other times and places.

Time travel is always intriguing and a nice device for meeting historical characters, but these books (at least the two I read) fall short of their potential.  Angel of the Battlefield, #1, takes too long to get to its subject, young Clara Barton, leaving not enough time to develop her story.  Little Lion, #2, takes us to the island of St. Croix and a teenage Alexander Hamilton–but again it’s mostly an occasion to meet the character, mix it up a little, and return to the present where a mystery surrounding the twins’ great-aunt Maisie is developing.  It’s probably all going somewhere, and if you want to learn a little something about the historical characters (further adventures feature Pearl Buck, Harry Houdini, and Crazy Horse, all with short bios in the appendix) they’re not a complete waste of time, but as fiction they leave a lot to be desired. 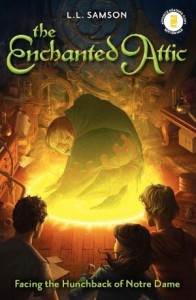 Twins Ophelia and Linus Easterday have just moved in with their mother’s twin siblings, Portia and Augustus Sandwich, because their parents have blithely taken off on a five year expedition to study butterflies.  “Both children were actually a bit relieved at Antonia and Ron’s Departure, due to the fact that the Drs. Easterly are lousy parents.”  That’s one way to ditch the ‘rents.  Now the coast is clear for the twins to freely explore the Ivy League milieu of their eccentric relatives, especially the attic with its chemistry lab—which apparently is still being used–and a large circle drawn on the floor.  Little do they know that the attic has charms to summon literary characters from fictional times to real time.  They’ll find out soon enough when the title character of Ophelia’s current book appears in the middle of the circle.

I like the premise of this series, and the author writes with humor and verve: what a great way to introduce kids to the classics of literature!  But it doesn’t quite work out that way.  For one thing, the narrator, who identifies himself as Bartholomew Inkwell, insists on being a teacher as well, so the narrative is riddled with quick definitions and italicized paragraphs explaining some literary concept or other discursion.  None of them are very long but they hinder the story, which takes a while to get on its feet and lumber forward.  By the time it does, there’s no room left in the scant number of pages to create a sense of how deeply strange it would be to have a fictional character occupying your attic, especially one as alien as Quasimodo.

Or rather, his lack of strangeness tests our willing suspension of disbelief.  Once the language barrier is overcome by magical means, and Quasimodo’s deafness overcome by a hearing aid, he talks like a sage: “I learned more from the bells than any human has ever taught me.  Treat something with love and respect and it will join you in making something beautiful.”  There is a villain in the piece, but the development and resolution come too quickly, without the necessary tension that makes resolution worthwhile.  Though not overtly Christian (note the publisher), it includes a sympathetic clergyman and Christian themes such as strength in weakness and faith like a little child.  Some inexcusable printing errors, like an entire paragraph out of place, make me wonder if the whole project was “from its mother’s womb untimely rip’d” (since we’re being all literary).  Saving Moby Dick might be better, though.

When Professor Templeton, the world-famous inventor of such devices as the Battery-Operated Toothpick (BOT), informs his 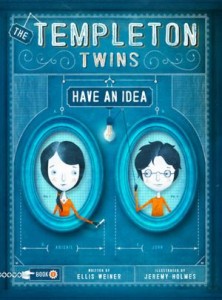 children that he’s accepted a position at another University, it all seems very sudden.  They were just beginning to get back to some form of normal after their mother’s passing a year earlier, and Abigail and John have finally persuaded their father, by means of an ingenious invention, to let them have a dog.  But Tickeridge-Baltock Institute of Technology (Tick-Tock Tech) has offered the professor a lab in which to develop his Personal One-Man Helicopter (POMH), and it’s too tempting an offer to resist.

Trouble, of course, soon comes knocking in the person of a former student with a grudge, and the twins are off on a rather routine adventure resolved by means of Abigail’s word genius and John’s mechanical gifts.  Like The Enchanted Attic and Lemony Snickett’s much more famous series, their story is told by The Narrator, a peevish sort who keeps barging in with peripheral comments, e.g., “I am being forced to tell you the story of the Templeton Twins.  Why am I being forced, and who is forcing me?  Well, perhaps I will tell you later.”  But he or she never does.  Much of the entertainment value depends on wordplay, especially names, like the Twins’ babysitter Nancy Noonan—obviously Nanny Nan.  Dean D. Dean and his brother Dan are the bad guys.  Each chapter ends with review questions, like “How would the Templeton Twins’ life be different if they had never been born?”  This kind of thing is mildly amusing the first time and increasingly gimmicky all the other times.  With its tick-tocky illustrations and diagrams the book seems over-produced (and definitely over-promoted) for the slenderness of the story, and mysteries suggested at the beginning don’t pan out.  Maybe they will in future installments—another day, another move to another university—but I’m personally not interested enough to find out.

Meanwhile, my search for the perfect middle-grade mystery series continues . . . .

I do like the Brixton Brothers mystery series a lot and J. J. Tully is fun for younger readers.  For other middle-grade series, here’s our take on Percy Jackson, the Books of Beginning, and Fabelhaven.