There’s a grand slam (plus one) among children’s book reviewers: Booklist, The Bulletin of the Center for Children’s Books, Horn 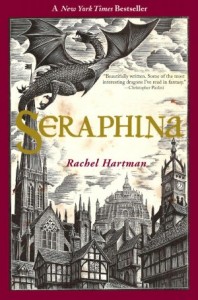 Book, Kirkus Reviews, Publishers Weekly, and School Library Journal.  All of these publications stick a star on their reviews of outstanding children’s books, but as tastes and opinions vary, new books that gather more than one star are relatively rare, and those that attract six stars are extremely rare.  So far this year (at last count), only five six-star books have been tabulated.  I’ve reviewed three of them: Code Name Verity, The Fault in Our Stars, and Z is for Moose.  Is this because I’m easily impressed?  I hope not!  Stars matter mostly an indicator of what our culture values, and those values are not entirely bad, especially when it comes to literary excellence. But where worldview is concerned, they’re usually guided by conventional wisdom, as the newest six-star novel indicates.

The title character is a gifted musician of good family—supposedly.  Family is an issue for Seraphina, for unbeknownst to all but a very few, she is a half-breed: half-dragon, that is, on her mother’s side.  Dragons can take human form (a traditional facet of dragon lore), and in this world they often do–some even passing for human, with predictable consequences like Seraphina. Consequences loom large from the very beginning, not only for the title character but for her nation as well.  Years ago a treaty of peace was signed between dragon- and humankind, and since then the two have co-existed more or less peacefully even though their differences are far more than scale-deep.  Dragons are rationalistic and reserved while humans are emotional and headstrong.  Both sides are bigoted in their own ways, and small provocations are starting to simmer under an uneasy surface.  As our protagonist complains, “I scrupulously hide every legitimate reason to hate me, and it turns out they don’t need legitimate reasons.”

With such a romantic title, there must be a love story: enter Prince Lucien, the illegitimate offspring of royalty—a bit of an outsider himself, though he has less to hide than Seraphina.  Their growing attraction reflects their mutual struggle for acceptance and trust, in an atmosphere of growing hostility and suspicion.

Well-drawn characters and interesting details flesh out this fantasy world: a religion of idiomatic saints (but no god); a matriarchal government; a primer on dragon anatomy.  Humor appears unexpectedly, as in this description of why Seraphina’s uncle piles up books on chairs: “For Orma and his generation, knowledge was treasure.  As dragons through the ages had done, he gathered it, and then he sat on it.”  Flashes of brilliant writing and real insight come through, especially in Seraphina’s observations on art:

That’s the secret to lying: conviction.  The right note played tentatively still misses its mark, but play boldly and no one will question you.  If one believes there is truth in art—and I do—then it’s troubling how similar the skill of performing is to lying.  Maybe lying itself is a kind of art.

Unlike some novelists who stack the desk, the author strives to portray both sides of this imaginary conflict fairly, each with strengths and weaknesses.  Humans create beautiful art, but also thoughtless violence.  The dragons are calm and rational, but also cold and loveless.  In some ways the story illustrates the difficulties of balancing contrasting temperaments in society (as well as in marriage and family), but the impression readers are most likely to get has to do with the acceptance of contrasting groups (race, gender, sexual preference, etc.).  “We were all monsters and bastards, and we were all beautiful”—cue Ray Stevens.

That’s the easy takeaway and it leaves unanswered questions about the reality of ugliness and ugly behavior, but with a love triangle in place and a war brewing, there’s more to come.  I just doubt that any conclusions will be significantly different.  Voracious readers with lots of time may find some nuggets of value here; the rest of us might just give it a pass.

For another novel of a dragon in human form, see my review of Heartless.  Also Reflection in a Dragon’s Eye about the movie version of The Voyage of the Dawn Treader.