“Grammar” is a stretchy word, enclosing syntax (sentence structure), spelling, punctuation and parts of speech—the mechanics of language.  Along with algebra, principal products, and geology, it would probably win a top five spot in the “Why do we have to learn this?” category.    When it came to diagramming sentences, some of the kids in my class were great at it and some didn’t get it at all (leading to the above question).  Education theorists have theorized that perhaps we don’t need it all that much; perhaps we can let kids develop their own ways of writing and spelling and self-expression.

You can imagine how well that works.  Giving up formal grammar is like a carpenter giving up his hammer and saw; setting aside the very tools needed not only to write but to read and to think.  Freedom of expression lies within the rules, not without them.  Just as you don’t become a great basketball player without understanding the game and how your body works, you’ll never advance beyond the most elementary writing skills until you know how sentences work.  (And how to break the rules, but don’t tell.)

I was one of those sentence-diagramming kids: diagramming was like a puzzle that you took apart instead of putting together.  I

dug it without seeing the true beauty of it—that had to wait until I was homeschooling my own children.  The beauty is the underlying logic of language.  Nouns and verbs are basic—in any language.  Nouns and verbs form the backbone of any sentence.  Everything else is some kind of modifier: description, qualification, connection, location in time and space, etc.  Diagramming showed that: the core sentence on a single line (either subject/verb or subject/verb/object), with everything else branching out from it.  Kitty Burns Florey rediscovers the joy of diagramming—and other language oddities–in Sister Bernadette’s Barking Dog, a book I highly recommend for every grammarphile.

What my sixth-grade teacher didn’t tell me was that we can only put words together to make meaning because we were born with that ability.  Every human baby has within his brain the ability to respond not merely to labels (Dog. Tree.) but also to ideas. (“See the puppy?  His name is Button.”)  Robinson Crusoe can teach Friday to speak English because Friday has the innate ability to recognize sentence patterns, even those that are not his own.  A three-year-old (or talkative two-year-old) can speak sentences that adults would be challenged to diagram, because she comprehends the logic.  It’s a gift.  God gave it to us, so he can talk to us.

But how to teach it?  I see two common mistakes in the way grammar is commonly taught: 1) tackling the subject too early, and 2) failing to integrate it with reading and writing.

When we first started homeschooling, my children were in first and third grade.  I wanted to cover everything the experts said they should know, so I bought a complete curriculum from a well-known publisher and made out my lesson plans.  As they say of battle tactics, no plan survives its first encounter with the enemy.  (Reality being the enemy, not the children.)  During the first few years I made my peace with most of the curriculum, except the language arts workbook.  The first thing I noticed was how repetitious it was: fourth grade ground out the exact same principles that we’d encountered in third; fifth grade backtracked over fourth.  Third graders were learning parts of speech and basic diagramming—or were they just being taught those things without actually learning?  It occurred to me that maybe the kids were not quite ready to take on sentence dissection because their thinking at this point was too concrete.  Elementary level is supposed to be the age for memorization and factual content.  But even though third-graders can learn that “a noun names a person, place, or thing,” they may not be ready to use that knowledge.  I started thinking it might not hurt to wait until some sense of abstract logic develops—fifth, sixth, maybe even seventh grade.  By then, ideally, the kids have been reading and being read to for several years and already know instinctively what makes a sentence.  With that knowledge as a base, they should be ready to see the relationships within a sentence.

My other big problem with the language arts workbook, and many other grammar programs, is that they tend to segregate “language arts” from language use—reading and writing.  If grammar is treated as a separate “subject,” then no wonder kids don’t see the use of it.  This came clear to me when my daughter could score 100% on a workbook exercise (the difference between there, their, and they’re, for example), but make the same mistake in original composition that the workbook was supposed to correct.  They’re was an obvious disconnect.

Theirfore (okay, I’ll stop now) any teaching of syntax and mechanics should be integrated as much as possible with reading and writing.  I like the way Learning Language Arts Through Literature does this, by asking students to copy examples from classic literature (good penmanship practice), then mark how the author used some principle of grammar to communicate effectively.  Then students can write their own sentences and paragraphs on the same model.  I also like the idea of teaching syntax, especially diagramming, once they start focusing on original composition (which I recommend holding off until fifth or sixth grade).  That way, they can diagram their own sentences, not some example in a book. 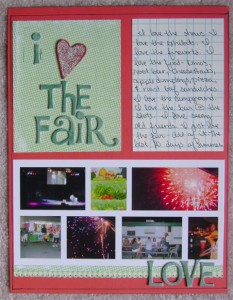 They’ll need a little practice other than composition, though, and for that you might want to try a language arts scrapbook.  We did this for spelling, not so much for other aspects of language arts, but if I had it to do over again I would try this in lieu of a workbook.  Use blank, unlined paper—light cardstock works best if you’re going to do a lot of pasting.  For every language concept– such as comma use, transitive and intransitive verbs, or active/passive voice–ask the student to find real-life examples in a novel, online article, textbook or newspaper headline.  Title a scrapbook page with the principle to learn: Where To Use a Comma (for example).  Copy or paste several of these examples on the page—the student can copy by hand, but if you make a photocopy and literally cut and paste, it’s more like a scrapbook.  Next, the student should write several original examples of the same concept, and here you can get creative: illustrate the sentences, add abstract designs in different colors, write captions for family photos or include the examples (appropriately highlighted) in a short story.  If you’re into scrapbooking, you can make a big family album to which each child adds pages (along with stickers and borders and embellishments).  Or it can be a simple three-ring binder with copier paper for pages.  Whatever their artistic leanings, as they contribute their own pages to the scrapbook, the kids are seeing how these abstract concepts really work.

With a do-it-yourself grammar program, how do you know you’re not missing anything important?  I would invest in a good language handbook or style guide.  The Write Source guides have been around for a while, and they are designed to be student-friendly.   Writers Express is aimed at grades 4-6, WriteSource 2000 is for grades 6-8, and Writers Inc. will last through high school and college.  The last time I looked, Writers Inc included some politically correct language, but for the most part they’re straightforward and they cover the basics, plus extra topics such as writing style and content.  If you can only afford one, aim for the middle level with WriteSource 2000.  I’m sure other good usage handbooks lurk in the education blogosphere—please let us know what you’ve discovered.

If you don’t have time for a scrapbook and you just want a good language arts program, you’ll have to invest some research time.  Basic subjects like reading and writing are best taught by taking into account the kind of learners you have.  I’ve encountered several theories about learning styles—are there just two? Three? Four? Seven?  I like the four-style system, always taking into account that any child is going to be a mix of more than one (drat these complex human personalities!!).  In general, Producers like going by the rules and filling in blanks; Relaters like group projects and give and take; Performers are hands-on and fidgety; Inventors are solitary and analytical.  Some workbooks can be effective for Producers.  Relaters might do well with a discussion-based approach like Learning Language Arts Through Literature or the Shurley method.  The old Winston Grammar program (which I’m told is still around) might work for Performers, and Inventors might best be approached through the logical practice of diagramming.  This is a very broad introduction to the types of grammar programs available, and since I’ve left the homeschooling circuit many more have come on the market.  Please feel free to chime in with suggestions.

(For the fidgety types, I developed a method of teaching syntax through ordinary wooden building blocks, such as these.  I don’t have room to go into it now, but if there’s enough interest maybe we can download a video later.)

The subject is huge, but relatable.  If your language arts curriculum doesn’t seem to be working, take a step back—or several steps back—and try to look at it from a fresh angle.  And don’t be afraid—you’re already programmed for language.  You just need to figure out how to teach it.

See last fall’s post on Raising Writers in Four Easy Steps for more on teaching composition.  And for homeschoolers who are new to this blog, check out Laid-Back Homeschooling and take some deep breaths.  Also worth revisiting: Emily’s Back-to-School Backpack and Mother’s Day Meditation from last year.

!
!
Get Equipped
Something went wrong. Please check your entries and try again.
Posted in Beyond Books, Resources