We think of summertime as beach days, catch-up-on-our-reading days, vacation days, camp days (more on that next week)—but what about make-a-budget or start-a-business days?  Economics and all its outriggers (like business), is a subject that gets bumped in favor of more traditional school fodder like algebra, world history, American literature, and chemistry.  For a subject that has immediate impact on every adult’s daily life, economics gets a very short shrift.  At some point in their growing-up years, kids should get a firm grip on money: what it is, how it works, and how to make it.  Two recent books and an old one can shed some light on a subject that may not be as complicated as it seems.

The Secret Life of Money: A Kid’s Guide to Cash, by Kira Vermond, illustrated by Clayton Hanmer. Owlkids 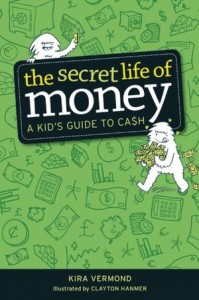 The author begins with the interesting premise that money is not just money—it’s also a measure of happiness and dismay, a destructive force as well as a constructive one.  The power it has is largely up to us, and that’s a good message to send.  In ten chapters, she addresses consumer psychology, credit, salary levels, compound interest on the debit and the credit side, benevolence and world poverty, all reasonably well with just a little liberal bias.  In her discussion of the sub-prime mortgage crisis of 2008 she blames the banks, with no acknowledgment of government policies (in the US, anyway), that encouraged risky lending.  She also doesn’t discuss the overlarge thumb that public-sector unions put on the wage scale.  She is uncritical of the World Bank and IMF.  And as for poverty, I read long ago that “What causes poverty?” is the wrong question for something that has always been the natural state of most of the world.  A better question is, “What causes wealth?” with a careful consideration of how those circumstances can be developed or maintained.

The chatty tone gets on my nerves sometimes, as in, “Money.  It’s a lot like an apple pie.  Seriously.  I’m not making it up.  (Okay, maybe I am a little . . . . ).”  On balance, though, she’s solid about the value of work (for its own sake, not just for the wages) and the necessity of saving, with practical suggestions for how to do it.  I also learned some things: for instance, did you know that Canada and some other countries are experimenting with polymer currency, as opposed to paper?

This one has been around for a while—originally published in 1989.  Mr. Maybury takes the persona of “Uncle Eric,” writing in response to specific questions from his nephew Chris.  For instance, “Dear Chris: In your last letter you asked me to explain inflation and recession . . .”  As you can see we’re into challenging material from chapter one.  The author goes on to address the origin of money, the origin of the dollar, the business cycle, wage and price spirals, volatility, recession and depression, foreign currency, and the influence of government on economic exchange, to name a few.  But he uses enough examples from history, as well as a clear and direct writing style, to make these terms comprehensible to the average teenager.  Or younger.

Richard Maybury is of the Austrian school, meaning conservative in fiscal policy and libertarian in social policy.  He believes “that government is best which governs least,” and states early on that we’d all be better off if we remembered this simple principle: There Ain’t No Such Thing As A Free Lunch (tanstaafl).  Critics complain that he slights public charity (welfare) and globalism.  That’s because he doesn’t like them.  Other readers may also be put off by the pages of self-promotion in the back pages (other titles and a newsletter), and I don’t find him as reliable on world and cultural events as he is on money policy.  But for a concise, no-nonsense introduction to sound economics he’s hard to beat. 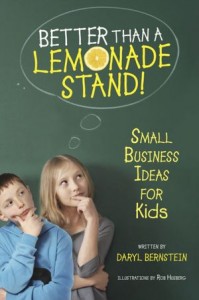 What it all comes down to is, How can we make money and enjoy doing it?  Daryl Berstein published his first version of this book in 1992, when he was a teenage entrepreneur himself.  He went on to become an adult entrepreneur, business advisor, motivational speaker, and author of more books.  This edition is an update that could perhaps have used more updating—some of his start-up business ideas seem very 20th-century—but the foundational principles are timeless.  Berstein realizes that not every kid is entrepreneur material, which is why he begins with a quiz to see “Are you ready to start a business?”

For those who are poised to hop in with both feet, he has common sense suggestions about commitment and courtesy, organization, pricing and—very important—choosing a business that suits individual personality and goals.  Once past the introduction, we get down to business: 55 specific self-directed jobs that underage kids can do.  Some of them won’t work for everybody: snow shoveling in Florida is a non-starter, wake-up calling would seem to have limited application, and painting rocks to sell would require some talent and imagination to create a salable product.  But the tried-and-true mingle with the unique-and-intriguing: how about Muffin and Juice Delivery? New-Product Assembly? Growing Seedlings?  Washing Sheets and Towels?  Ideas tend to spawn other ideas, so some of these could light a spark of creativity.  Also, looking around the neighborhood or community can help kids recognize needs they can fill.  Every business suggestion includes tips for how to advertise and what to charge, with a realistic assessment of the time and material required.  Since publishing the first edition, the author has received countless letters and emails from other middle-grade moguls who have started their own successful businesses, and many of these are included.

The tone is enthusiastic and can-do, which may raise expectations too high.  Also, recent stories about lemonade stands being shut down by over-zealous government agents may dampen the entrepreneurial spirit.  But that spirit should be encouraged whenever possible.  It your kids show some get-up-and-go, this book might help them go places.

None of these books have a Christian focus.  Does anyone have suggestions for good Christian materials on the subject?

Three middle-grade novels about making it good in business are reviewed here, here, and here.  Also see our post on “Labor Day: Books to Get Your Kids Working.”