Some kids like numbers and are good with them; others aren’t.  Though no longer a kid, I fall in the latter category,but these two books helped me understand their appeal a little more: 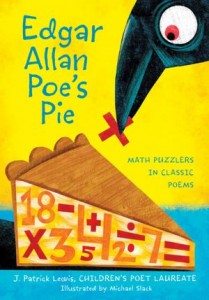 The title says it all, but to get a better idea, here’s how one of the poem/puzzlers begins:

“Emily Dickenson’s Telephone Book, inspired” by “My Life Closed Twice Before Its Close”

My book closed twice before its close—

Were smudged around the edges—

This is a fun idea, but also ingenious: whoever thought math and literature could be so congenial!  The title poem begins, “Once upon a midnight rotten/Cold and rainy, I’d forgotten/All about the apple pie/Still cooling from the hour before . . .”  Or how about this hommage to Robert Frost: “Whose underwear?? I wish I knew/ Who left them there for me, all brand new—“

The puzzles are simply rhyming word problems that encourage logical thinking and the practical application of basic functions.  Your math whiz will breeze right through them, but even the number-challenged will be rewarded if they take their time and think it through.

Once the problems are solved, the real fun begins.  All the poems are “inspired” by a well-known work, some of which (at least) should be looked up online for comparison.  The 14 featured poets include Walt Whitman, A. A. Milne, Edward Lear, Shel Silverstein, Langston Hughes—an “must-know” selection, who appear with brief biographical sketches at the end.  The author, a Children’s Poet Laureate, obviously knows his metres and your more literary-minded kids will enjoy comparing and contrasting the remodeled poems with the originals.  No need to forget “school subjects” in the summertime, with brain-teasing excursions like this on hand. 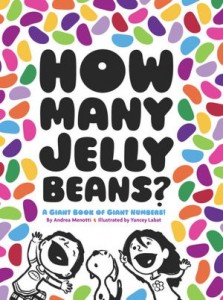 How Many Jelly Beans? A Giant Book of Giant Numbers! By Andrea Menotti, illustrated by Yancey Labat.  Chronicle Books, 2012.  Age/interest level: 4-up

Emma and Aiden are trying to decide how many jelly beans they can eat at a sitting: Emma thinks ten, Aiden wants twenty.  If he can have twenty, Emma decides she wants twenty-five, and before long they’ve talked up 100 jelly beans, which appear on the table before them.  Aiden declares he can eat 1000 jelly beans in a year—no, 5000!  Which no longer fit on the table or the bed, but spill over into a double-page spread.  Can you see where this is going?  Do you want to know what a million jelly beans looks like?

I love this book, and have already used it in Sunday school to show the kids how God multiplied Abraham’s descendants so that over a million came out of Egypt.  (Can you count the stars?)  Even with the oversized format, the final spread takes a total of eight page-size panels, unfolded one by one as amazement grows: one million jelly beans.  And just think: one billion would be 1,000 of those eight-page spreads!  One trillion gives me a headache just to think about.

Since library copies are bound to get torn up, I’d be tempted to buy my own.  And I’d love to send one to every member of Congress and every staffer in the White House, who may have forgotten just how much a million is: Stop spending our kids’ jelly beans!  The next best thing is to give our own kids an idea of what big numbers really are, and maybe they won’t be so prodigal with their dollars.  If we have any dollars left when the party’s over . . .

Speaking of money, here are two recent (and one not so recent) books touching on that subject.  As for puzzles and literary mysteries, The Phantom Tollbooth is a classic of the genre.  Does your math whiz (or anybody else in the house) have problems with reading?  See Emily’s tips.