Summer is the traditional time for road trips, and road-trip novels traditionally roll out in the spring.  A title from this year and one from last have some interesting “faith” connections, but it’s unclear what faith is getting connected . . . 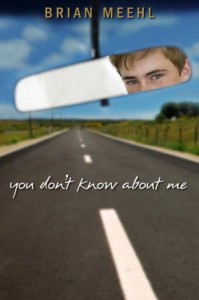 Billy Allbright doesn’t have it all together but his mom does: she’s a Christ crusader who’s convinced him he’s headed for the same destiny: “You’re the brightest candle God gave me.  It’s my duty to let it shine.”  Her idea of shining is to storm grocery stores with Sharpie pens to cross out all the devil references (as in devils-food cake and deviled ham), or to invade Toys-R-Us with electric clippers to shave the heads of Elmo dolls.  In other words, Mom is a nut.  I’m sure the author knows she is an exaggeration of a fundie, but with this straw mom he makes his first mistake.

Billy has been told that his father, a revival preacher, died long ago.  But shortly after their move—or rather, flight–from Tulsa to Independence, MO, he gets a smuggled message from . . . his dad!  A cryptic DVD, in which an apparently dying man instructs his son to follow a trail of clues hidden within a book he’s never read: Huckleberry Finn.  Billy feels he has no choice but to run away on his trail bike.  The bike is soon lost, but no matter because he hitches a ride on a raft—that is, camper—driven by the obscurely-named Ruah Branch, a black pro-baseball player.  (Ruah means “breath of God”—I looked it up.)  As their journey haltingly continues, Ruah becomesJim to Billy’s Huck, a man with a price on his head (Jim’s slave value=Ruah’s player contract) and some secrets that will soon be uncovered (Jim is human!=Ruah is gay!).  Their adventures echo that Great American Novel, including detours, separations, and sidetracks, colorful con men, blinding revelations and, above all, Billy’s hard-won decision to go to hell if being true to his friend requires it.

I was struck at the beginning with how much the author seems to get right.  Billy comes across as an honest seeker, with some sharp and witty observations.  The writing contains enough vulgar terms raise objections, but only a couple cases of profanity (which seems an odd thing to give medals for, but that’s the state of YA today).  And there’s a lot of Bible quoting, not just the better-known passages, but wads of scripture from Job and Jonah, both of whom are prototypes for the journey.  But the straw-mom argument generates straw-babies.  The author said in an interview that he set out to write a Huck Finn odyssey, not a gay apologia, but when considering what contemporary issue compared to the slavery dilemma of Huck’s day the answer, “obviously,” was homophobia.  Well, of course!  Except for being run down like animals and sold in the market and separated from their loved ones and kept ignorant and not allowed to vote, the plight of gays is exactly like that of a runaway slave like Jim!

Thus his novel becomes a sermon, in a way that Huckleberry Finn never did.  Billy decides to “save” Ruah, marshaling all his arguments from Genesis and Leviticus (never Romans or I Corinthians).  Ruah, a Bible student himself, shoots them down easily, in a speech that sounds more than a little canned.   Because he can’t answer, Billy somehow decides he’s gay (Whaaa . . .?) and makes a desperate offer of himself to Ruah, who nobly turns him down (his gaydar tells him the boy’s heart isn’t in it).  Though not a little disturbing, this scene actually makes a good point that sexual confusion is rife in many teen boys, and it shouldn’t be taken advantage of.  Billy’s confusion owes a lot to his mom, who taught him to divine truth from the Good Book by closing his eyes and letting it fall open to random passages.

What Ruah started, Billy’s father completes.  The whole treasure hunt was an elaborate, Tom-Sawyer-like prank by a spooky guy with a Mark Twain fetish, but before kicking the bucket, he passes along words of wisdom: “Love your mother for who she is.  But don’t waste your life trembling before a higher power.  Treat God, and all the other gods you meet in your long, happy life, as the most fantastic friends every invented by humankind.”  “I’ll try,” says Billy.

Fantasy friends can’t tell you anything you don’t already know; they won’t issue any judgments or make any laws, and they certainly won’t die for your redemption.  When Huck, and Billy, boldly declare they’ll go to hell, what they’re confronting is not Christianity.  What Ruah claims to believe and Billy’s father rejects and Billy’s mom preaches is not Christianity either, no matter how much scripture and God-talk they drape around it.

For all the sharp observation, You Don’t Know Me pretends to be sympathetic to the faith while simultaneously dismissing it.  It addresses a reality that’s actually a phantom.  It masquerades as thoughtfulness without giving much thought at all to the opposition.  And it will confirm the misconceptions of young people who read it—the very sort of questioning, intellectually curious kids who should be given a real alternative.

At age seventeen, Luke Dorsey is the world’s unlikeliest best-selling author.  The summer before, his 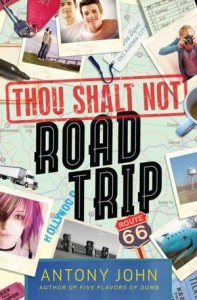 youth pastor urged him to write down his reflections about faith, which became a book-length pseudo-Bible titled Hallelujah! (The clunky subtitle, The Spiritual Journey of a 16-Year-Old St. Louisian, is seldom referenced.)  An appearance on TV’s Pastor Mike Show has made his book an overnight sensation, leading to an eight-city book tour starting in L.A.  Luke will be making the cross-country trip with his 19-year-old brother Matt, a skeptic with his own agenda.  Hijinks are certain to ensue, especially when Fran shows up.  Fran is Luke’s former crush and the younger sister of Alex, who is Matt’s girlfriend from their home town.  Alex, as well as Matt, have moved to L.A. and Fran, who was visiting her sister, now needs a ride back to St. Louis.  Do we have that straight?

Fran was once a super-Christian but went off the deep end last summer–now she colors her hair purple, drinks herself sick, and sports random piercings and weird tattoos.  We eventually learn what set her off, and it seems minor in proportion, but the whole story suffers from lack of proportion, not to mention credibility.*  In spite of her problems, Fran is presented as real Christian, while Luke has been faking for some time and needs to get knocked over the head.  The road trip will do that, because nobody wants to cooperate with him.  They can’t afford more than two motel rooms, and Matt and Alex claim one of them.  So Fran ends up bunking with Luke for most of the way, an “appearance of evil” that goes unnoticed until near the end, but there’s still plenty to compromise Luke’s appearances at the Born-Again Bookshop in L.A., the Divine Depot in OK City, the Good Shepherd Bookstore in Amarillo, the Inspiration Bookstore in Springfield, etc.  Luke’s inflated reputation deflates rapidly, but not until they reach St. Louis do fans start booing and throwing things at him.

It’s all supposed to be good ironic fun, as well as an exploration into real faith.  But, as with You Don’t Know Me, the targeted “faith” is nothing most Christians would recognize.  Anthony John, like Brian Mehl, apparently has some religious background and/or Bible knowledge, but no clue about orthodox Christianity.  It’s hard to get a handle on what Luke’s phenomenal book is about, in spite of strangers gushing to him that it changed their lives, etc.  Luke is going forth on his pastor’s admonition to spread God’s word, but just what is God’s word?  We never know.  Jesus is first mentioned as a profanity and not again by name until page 255.   Luke asks one good question: “Am I actually a fundamentally bad person without realizing it?” It’s answered in a way that says, Well yes, kind of, but once you shake off your spiritual pretensions you’ll be okay.

Not surprisingly, Luke and Fran make up and make out, spending one magical night beside a pond behind their motel.  I don’t think they go all the way—the text is a little hazy on that—but apparently they’ve found salvation in each other’s arms.  Says Fran the morning after: “’This event—this sunrise [on the day of solstice]–was a holy time for ancient civilizations.  It was a time for worshipping the earth, and getting married, and celebrating the plants and crops.  I get it too.’  I pulled her close.  ‘Do you ever find yourself wishing our faith had moments as . . . definitive as this?’ I ask.  ‘Something you can feel and see.  Something so obviously real.’  ‘Yesterday I did.  But today I woke up next to you.  If that isn’t a miracle, I don’t know what is.’”

A lot of it is hormones, sweetie.  As for definitive, bread and wine at communion is that, and the once-for-all sacrifice of God for mankind is even more that.  The thing that bothers me most about this book is probably not the author’s fault: it is billed as Christian YA, or at least shelved in that spot by the local librarians who only read the book jacket.  Maybe they were just confused.  Judging by these two books, there’s a lot of confusion to go around.

*However, I appreciated this insight from Fran: when confronted about her bad behavior, she replies, “I figured someone would eventually [tell me to stop]–someone who cared; someone who was afraid for me.  But I was wrong.  Everyone was afraid of me instead.”  Hmm . . . how often have I avoided a pierced and tattooed young person because of fear?

For more summer road trip stories, see “Hitting the Road“; also our reviews of Around the World in 100 Days , North! or Be Eaten, and The Charlatan’s Boy.  For more YA novels that address faith (which you may or may not want to read), see reviews of Where Things Come Back and Revolver.    Of course, the ultimate faith-based road trip story is Pilgrim’s Progress, which Emily has explored in depth with her Dangerous Journey posts, starting here(or just get the illustrated download and save yourself some clicks!).