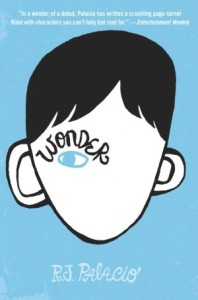 August (Augie) Pullman obviously doesn’t remember the day he was born, but in the first few chapters he tells us his mother’s version.  The story as she tells it (with sound effects) always cracks up Augie and his sister because of his mother’s depiction of the nurse, a tough, drill-sergeant type who can’t do anything without farting.  But when Augie is delivered, everything gets very quiet.  His father and the other nurse take the baby and dash from the room, the officiating doctor actually faints, the farting nurse yells at him to wake up.  But she’s the one who proves to be the most help in the next few hours, especially by leaning close to Augie’s mother and whispering, “He who is born of God has overcome the world.”  That, of course, is I John 5:4, though the quote is not identified.

Several years ago, my mother sponsored a Polish couple to come to America for a series of surgeries on their only child.  Their baby looked like Augie: her face was more like a fish than a human, with bulging eyes located about one inch lower than where they should be; flat cheeks, a fat, fleshy nose, a sharply convex mouth.  The Polish couple made up their minds from the beginning that their daughter was perfect, and so do Augie’s parents.  But that leaves the problem of everybody else.  Augie, now age ten going on eleven, a fan of ice cream and Star Wars, feels perfectly normal inside.  But his appearance is physically jarring to strangers–children have been known to scream and run away at the sight of him.

That’s why, when his parents inform him that it’s time to transition from homeschool to Beecher Prep, not far from their home in upper Manhattan, Augie is determined not to go.   He does go, of course, and Wonder charts his fifth-grade experience with the trials and triumphs, friends and foes, pacts and pranks of any fifth-grader who happens to look like a monster.

It’s not until the narrative passes to his teenage sister Olivia that we get a description of what Augie actually looks like.  Before that we go through September and October from his point of view, reacting to others reacting to him.  First meetings are always the worst; after that he feels he’s making progress until an overheard conversation sends him back to Square One—maybe even back to homeschool.  But once over that obstacle, it’s onward and upward until Augie finds himself surrounded by friends at the fifth-grade graduation and awards assembly.

Readers will identify with Augie only up to a point.  They may identify more with his family and friends, which is why the narrative is passed around from Olivia to Augie’s first school friend, Summer, then to his best bud Jack and Olivia’s friend Miranda and Olivia’s new boyfriend Justin, etc.  Maybe a few too many, but that’s the effect Augie has—he pulls perceptions out of whack, makes people think differently.  This isn’t always easy: Olivia starts her part of the story with her personal guide to the cosmos: her brother is the sun and everybody else orbits around him.  Though she loves him, she can’t help feeling pushed aside by his never-ending physical and emotional needs.  Her friend Miranda sees Augie as a reason to distrust the fates, while Justin finds evidence that something is right: “The universe takes care of its little birds.”  Augie’s greatest asset is his family, a tight-knit bunch that weathers storms together and expresses love verbally and physically (and sometimes even to excess—enough with the I love you‘s!).  Outsiders who get to know him are drawn into the family orbit too, always to their benefit.

The worldview is triumphant humanism: looking to the divine spark in every person, choosing kindness over rightness.  “Such a simple thing, kindness.  Such a simple thing.  A nice word of encouragement given when needed.  An act of friendship.  A passing smile.  And when you do this, if you act just a little kinder than is necessary, someone else, someday, somewhere, may recognize in you, in every single one of you, the face of God.”   This is from the headmaster’s end-of-term speech, which lays it on a little thick, like other parts of Wonder.  One thing I wonder: will this novel be as popular with kids as it is with adults?  When kids know they are being taught Important Lessons, they tend to get a little resistant.

The main character might win them over, though: he’s bright and eager and finds the same things funny that they do (demonstrated by the fart and butt jokes in the first few chapters).  People like Augie, planted squarely in human society, force readers of all ages to take quick inventories of their deepest places: Are we afraid, or even angry? Why? How do we respond? Is pity sufficient? Why not? What does the existence of such people say about God?  What does it say about us?  The conclusion of the novel is almost a Hollywood ending, but it feels real, and the journey was definitely worth taking.

About that quote from I John, though: it should be pointed out that John is making a distinction between those born of God and those not born of God, which is a matter of faith in Jesus Christ.  Don’t let that one go by without clarification.  If you read the book to or with your kids, here are some questions to think about: 1) Which narrator do you most closely identify with?  2) What do you like about Augie’s attitude?  What parts of him do you think need some work?  3) What do you see as true and false in the headmaster’s closing speech?  4) Which of the “Precepts” at the end of the book do you like most?  5) Can you make up your own precept based on your thoughts about this book?