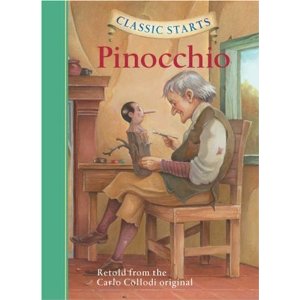 A few weeks ago, I posted a written interview with Simonetta Carr on her novel for young readers, The Weight of a Flame: The Passion of Olympia Morata.  Which brought up the fact that Simonetta was, like Olympia, born and raised in Italy.  So as part of our series on folktales from around the world, I asked Ms. Carr to join us again to talk about Pinocchio, perhaps the most famous classic Italian story, and how she interprets the story both as a Christian and an Italian.

I hope you all will enjoy her answers as much as I did.  (And I hope you’ll appreciate the “keeping it real” aspect of this recording, complete with interruptions from my kids!)  For more on her work, see her website, Christian Biographies for Young Readers.  You can purchase her books on Reformation Heritage’s or P&R’s websites.

Below are some comments Simonetta sent as a follow up to the podcast.  It includes the Italian version of the Lord’s Prayer, in case anyone would like to read along or even teach it to their kids!

You could mention that the original Pinocchio story was a lot rougher than the Disney movie. Pinocchio was very rude and cruel to his father. He actually killed the cricket (who came back to life at the end). I think it’s a very well written story and, even if there is a moral at the end, it’s not overall moralistic. That’s why we can identify easily with Pinocchio. It’s also interesting that Pinocchio kept making amends and then he went astray a few minutes later. That’s so much like us! I guess at the end the reader feels there is hope. It’s too bad that the “redemption” comes from his own good deeds to his father, but as Christians we know where our real hope lies.

There is a very good movie about Pinocchio which is quite faithful to the book, and it’s by Luigi Comencini. I haven’t seen it in a while but if parents wanted to preview it, it might be interesting for some families to watch. The book is also in English. The author is Carlo Collodi, and he started to write the book (as a series of stories for a magazine) in 1880. As I said, Italy became a nation only in 1861, so at that time they were just starting to have education for all, and many lower class children were resisting. I think Collodi was actually inspired to write Pinocchio when he met one of these children in the streets.

About the family, you asked about negative effects of this priority. I guess one thing to remember is that from the end of the Roman Empire until 1861 Italy was divided into small states, and borders were always changing. The Italian people came to distrust rulers and developed stronger loyalties to their families and to their cities than to their “state”. One negative effect is the mafia, which developed from that.

About the Italian church, it’s an actual URCNA church plant! You can find it here  http://www.chiesariformatafiladelfia.org/ and here  http://www.reformationitaly.org/the-church-in-milan-cerf/

For more interpretation of culture and folktales through a Christian worldview, see our podcast with Japanese Missionary Roger Lowther and an written interview with American Girls author Jane Kurtz.