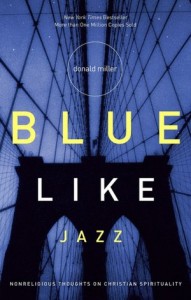 Blue Like Jazz: Nonreligious Thoughts On Christian Spirituality, was published in 2003 by Thomas Nelson.  Since then it has become a staple of Christian college campuses and nondenominational churches that meet in downtown warehouses and storefronts.  This spring we get the movie version, which will probably enjoy a very limited run before going to disc and download, but renewed interest may have parents wondering again, as they did with The Hunger Games, what their kids are reading.

An alternative subtitle might be How I Hung Up My Evangelical Hang-ups and Learned to Groove with Jesus.  The author was raised a Southern Baptist in Houston, and gradually made his way westward to Portland–a spiritual and geographical pilgrimage from the “fever swamps of fundamentalism” to the heights of love and acceptance in a nontraditional church called Imago Dei.  The book more or less charts that journey, following a meandering course through chapters titled “Belief: The Birth of Cool”; “Confession: Coming Out of the Closet”; “Church: How I Go Without Getting Angry”; “Worship: the Mystical Wonder,” and so on.

There’s a lot to like about Miller and his writing, and a lot to be wary of.  His style calls to mind a Christian Catcher in the Rye, peppered with Salinger-like phrases such as, “like a madman,” “this guy Bill Bright,” “all the stuff,” “depressed and all,” etc.  It’s not surprising to learn, in the last chapter, that The Catcher In the Rye was one of Miller’s formative books.  Not surprising, but a bit discomfiting, because Catcher is one of those books meant to be outgrown.  Its hero Holden Caufield judges the “phoniness” of his society with little empathy for anyone except himself.  Since he’s only twelve, he can be excused for his youth.  But Miller is in his thirties.

In the book he claims to be coming around to some tolerance of evangelical Christianity, which to his mind is dominated by Republicans.  However, even if Republican saturation is true in his experience, such a judgment is the same kind of broad-brush designation that he condemns in Evangelicalism.  For example: “The problem with Christian culture is that we think of love as a commodity.  We use it like money.”  That is, the church withholds its love from anyone who doesn’t behave in approved fashion–a sixties-style complaint carried on today in countess “diversity” ads and public service announcements.  Like all stereotypes, this one has an element of truth.  But the church is much more diverse than he presents it, and besides, he may in some cases confuse rejection with biblically-mandated discipline.  To reprove a brother for disobedience is not a lack of love but an exercise of it, and one that the Evangelical church may neglect more than it performs.

Miller also lets some hypocrisy slip in the political arena.  He makes the point that God is not a Republican, and Jesus is apolitical.  Fair enough, but he also implies that if Jesus had a preference he would lean toward the Democrats.  In the narrative, Don happily pickets George W. Bush and castigates evangelical Republicans for their obsessive focus on two issues, abortion and same-sex marriage (another generalization).  On his blog he claims to have voted for Bush and to cherish friends on both sides of the political spectrum, but anyone reading Blue Like Jazz would come away with the impression that Republicans are at best a comical nuisance.  And his country?  Well . . .  “America is one of the most immoral countries in the world and our media has reduced humans to slabs of meat.”

Miller is passionate about a relationship with Christ, and is at his best when exploring what that means.  While no fan of “organized religion,” he does not embrace an independent, lone-eagle faith.  The value of community, for him, is that it “made me realize one of my faults: I was addicted to myself.  . . . I discovered that my mind is like a radio that picks up only one station, the one that plays me: K-DON, all Don, all the time.”  Coming to Christ meant stepping out of his self-absorption and embracing the brothers and sisters Christ died for.

He’s fuzzy on doctrine, perhaps deliberately: “For me, the beginning of sharing my faith with people began by throwing out Christianity and embracing Christian spirituality, a nonpolitical mysterious system that can be experienced but not explained . . . I couldn’t share something I wasn’t experiencing.  And I wasn’t experiencing Christianity . . . . It felt like math, like a system of rights and wrongs and political beliefs, but it wasn’t mysterious, it wasn’t God reaching out of heaven to do wonderful things in my life.”

Experience is crucial, and an overemphasis on doctrine for its own sake chokes off love and joy.  One wonders, though, how seriously Miller believes that his Christian spirituality can’t be explained, since he takes up the whole book trying to explain it.  For the rest of us, church history and our own experience show that it’s very difficult to find the proper balance between truth and love–how much to tolerate, how much to insist upon.  Our approach to unbelievers and new Christians should assume a depth of ignorance (on their part) unknown fifty, even twenty, years ago, and charity and humility on our part.  We desperately need sound teaching these days.  But those outside of Christ, and babies in the faith, will have to take baby steps to get there.

Here’s how Miller explains his faith to an unbeliever: “‘The message is that man sinned against God and God gave the world over to man, and that if somebody wanted to be rescued out of that, if somebody for instance finds it all very empty, that Christ will rescue them if they want; that if they ask forgiveness for being a part of that rebellion then God will forgive them’ . . . ‘God says the wages of sin is death, and Jesus died so that none of us would have to.  If we have faith in that then we are Christians.'”

This is about as basic as it gets.  Miller seems content to park here and groove with Jesus, overlooking biblical admonitions to graduate to a more meaty diet.  His concerns are the concerns of youth: what’s real, what’s true, and who am I in the world?  Christian parents, even homeschooling parents, shouldn’t assume they know everything their kids are thinking–some very Don-Millerish thoughts may be going through their adolescent heads right now.  For young Christians and the adults who love them, Blue Like Jazz raises issues that are worth thinking about.  But sooner or later, they’ll need to move further up and further in.

The movie version, which I haven’t seen, is of necessity more narrative and less discursive.  (See the trailer here.)  And it received an PG-13 rating for “Mature thematic material,” including drug use, sexuality, and profanity, so be advised.

If you’re just joining us, you might be interested in what college kids are thinking about The Hunger Games, starting here.  Emily recounts her spiritual journey through reading in Behind the Bookcase.  Also see her Christ in Literature series.  Other posts  of interest for college kids and their parents are Alan Jacobs’ The Pleasures of Reading an an Age of Distraction and Janie’s read-along series on That Hideous Strength and The Abolition of Man.